A date with my boy!

Last week, Josiah said to me, "When can I take you on a mommy/son date? I think I have enough money now." So, we decided that after Jonathon got home, we would head out to the corn maze in Sturgis. He had a certificate for Subway, and that's where he wanted to take me to eat. As the corn maze was on our way to town, we stopped there first, thinking it wouldn't take long, and then we could go get lunch. We started the maze and had no idea how big or how long it would take. 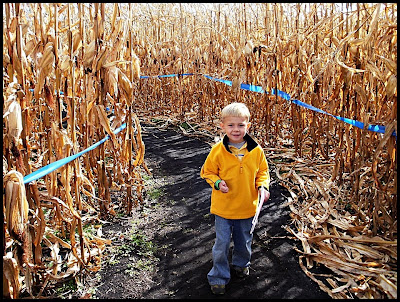 With a paper about the Wild West and a pencil in hand, we set out to find our clues, stamps, and learn about the great west. 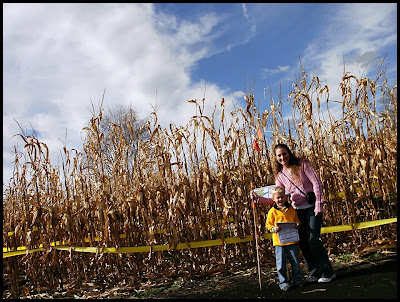 Our first stop filling out the paper we got. Corn stalks made for good camera stands but made them a little tipped. : ) 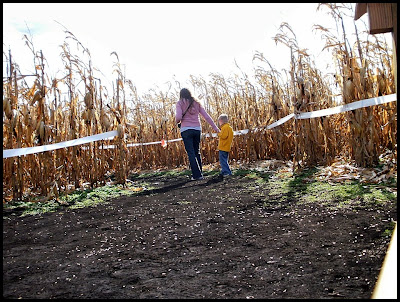 Off we go, for a long walk! 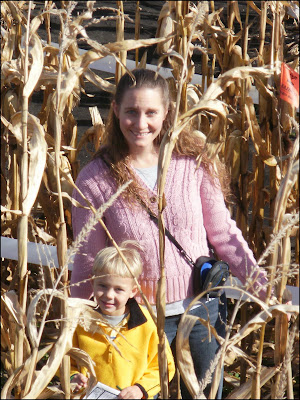 There was even a bridge in the maze, which is where the camera was for this one. One of the corn cops took our picture. I was hoping for one from where he was standing, which was up pretty high, but he zoomed in on us. It turned out good anyways! 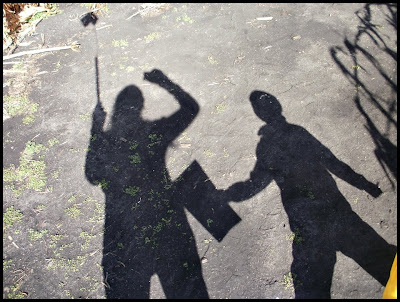 Because of the sun shining so brightly, we followed our shadows, or they followed us, most of the time. So, we decided we would strike a poes, with our flag (in case we got lost in the maze) raised high. 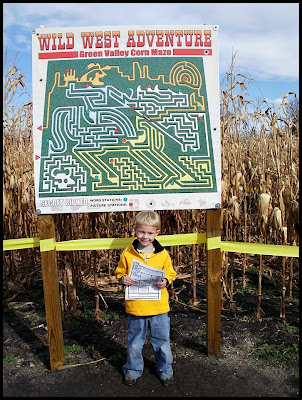 The map of the maze. It was amazing! 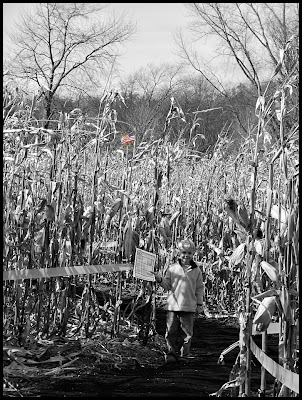 We got to this spot, almost the end (after needing help from the corn cops just once), and I could see the flag blowing in the wind. Yes, we made it! 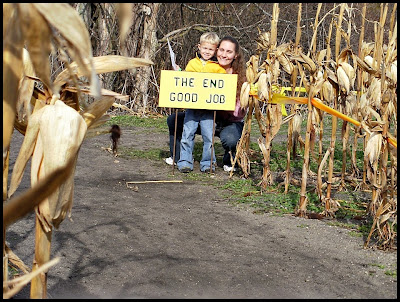 When we went into the maze, two high school boys and a man were coming out, and one of the boys yelled, "We made it out!!!!!" So, when we got to the end, Josiah said, "Do you think we should yell that we made it out?" I chuckled, and we walked hand in hand to the tent to return our flag and pencil. 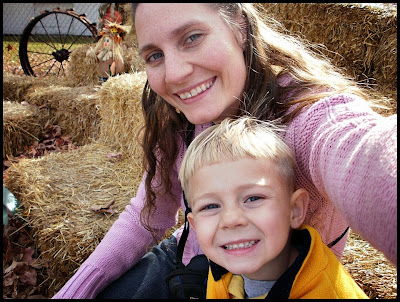 So, after walking (sometimes in circles) for 2 hours, we finally made it out. Boy, were we glad since we were both quite hungry. Got back to the van and then went to have some Subway. He even bought my sub. With a little money left over, he thought that he had to give way too much of his money to pay for things. Haha, life lessons learned as he takes his mom on a date. I pray that little boy grows up to become a respectful young man who follows the Lord and some day treats a special lady as great as he treated his momma on this beautiful day!

Some of October at a Glance

My how time flies, and I get behind on this thing. Too bad I'm not caught up in the children's scrapbook. That sounds like a good winter project to me. Haha, I think I said that last winter. 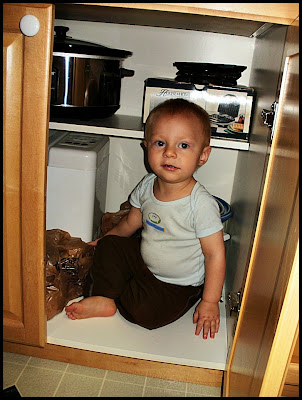 As you can see, Benaiah is growing up, walking, saying a few things, and gets cuter and ornerier by the minute. In the above picture I caught him playing in the cupboard. Not a big deal until I find potatoes and onions all over the floor. Obviously I caught him before he found the food that look like balls. : ) 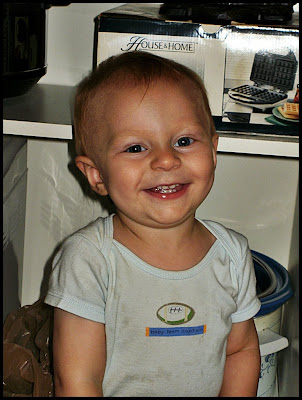 He knows he's been caught. 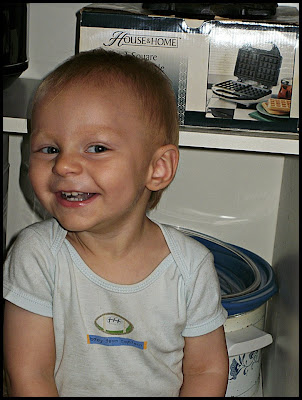 And that's the ornery face.
He keeps us all in smiles, even during those times that aren't so happy. My Grandma Murphy passed away a couple weeks ago. Life can change so quickly. I am so thankful for the pictures that we were able to take earlier in the year with my grandparents. What a blessing to have those now. The time of the viewing and funeral all went by so quickly. It seems like a moment in time that came and went without much processing really taking place. Yahweh did give us a beautiful sky one evening while the children were out playing and it reminded me that He gives and He takes away, and He continues to spread His sun beams wherever they are needed. 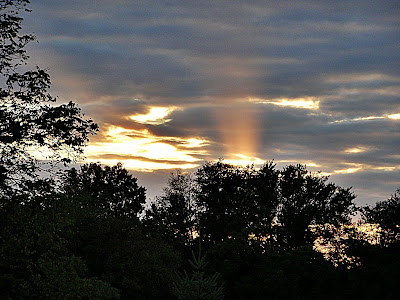 Before we headed out for the viewing of my grandma, we went to a local Farmers Market store and bought some apples to sauce. It seems that we found things to do to keep us busy and our minds off of the loss. We were able to get 15 quarts done, felt good about our accomplishment, and then got ready to head to Coldwater. 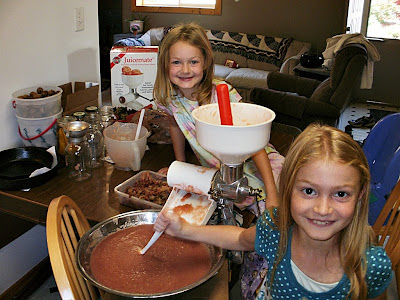 My girls were great help with this project! 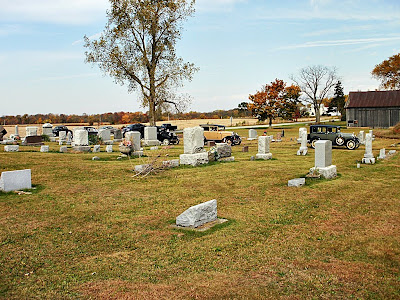 It was so nice to see all the cars line up in my grandmother's processional. My grandparents have many friends in their car clubs, and some of them showed up in their cars to bid their farewells. 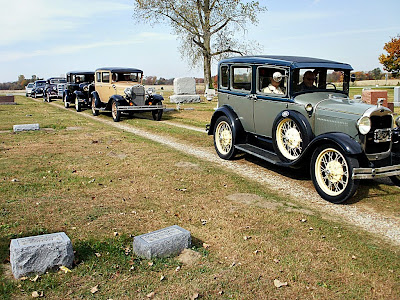 If you want to continue reading, feel free, but no tattling on me for the pictures that I took!!!! 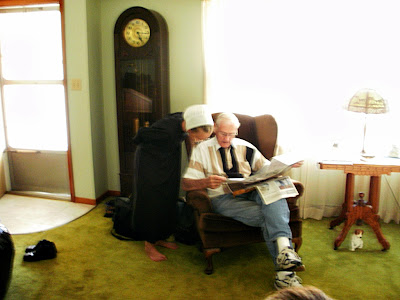 We all went back to Grandpa's after the funeral to visit with family and go through things. As Grandpa sat and read the paper, he had a very interested girl reading over his shoulder. They were both so into what they reading, it was a great moment for a quick picture. 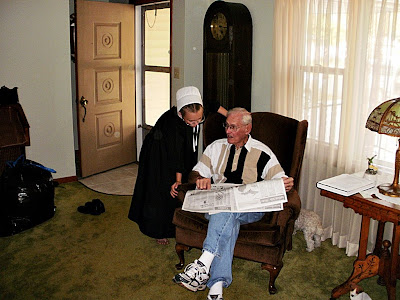 Oh, this is Thelma, my oldest niece. 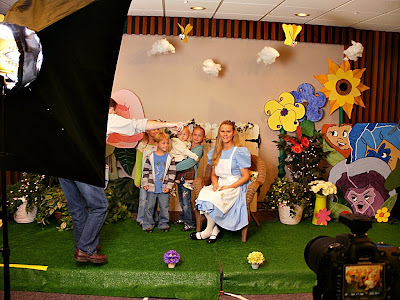 Last week we took the children along with some friends to Goshen Library to do an Alice in Wonderland tour after we spent the week doing an unit theme in that. It was free, fun, and a nice night out with friends.
The pictures below are from just last night. I went in to check on Benaiah, making sure he was asleep and found him in Josiah's bed. He does love his brother.

Upon covering him up, so he didn't get cold in the night, I heard a strange sound coming from above. So, I stood up and looked at Diella to see this...... 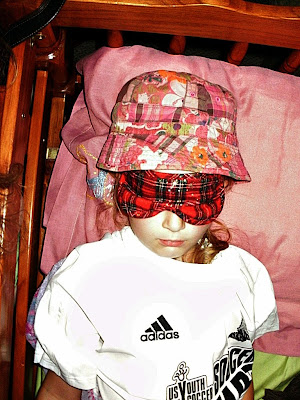 and she was snoring. It was priceless! Love that girl!
We have our moments of joy and our moments of grief, but through it all we rest in our Father's hands to get us from one moment to the next. He is faithful to give when we are in need and take away when one is ready to be with HIM. Bless the Lord for HIS unfailing love!