A Rainbow of colors shirt day

﻿We are gearing up for our end of the year school program, which will be all about rainbows this year.  In trying to figure out what the children should wear, I decided as part of their art class, they should make tie dye shirts.  The tie dye kit was a little pricey, but I used a coupon which made it more reasonable at Hobby Lobby.  The girl's shirts I found at Goodwill, and the boy's shirts I found at Walmart on the clearance rack, so all in all the project didn't cost us that much, AND I can include it as part of their school.
﻿ 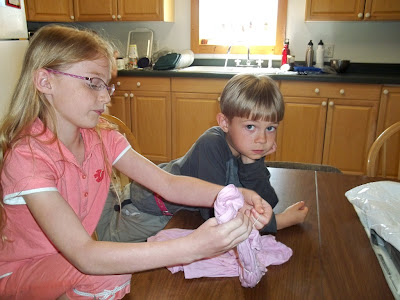 Step 1:
Put rubber bands around the shirt in the pattern that you want.
The children all used different patterns, so they were very excited to see what they all would look like in the end. 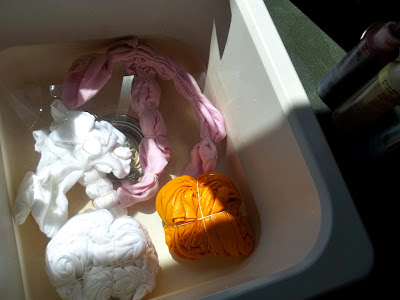 Step 2:
Soak shirts in the solution that comes in the kit for 15 minutes.
As you can see, they are all differently done.  Two did a spiral bundle wrap and two placed rubber bands just where they thought they would like the designs to be.  Actually, I did Benaiah's for him, but as an example of something different to the children. 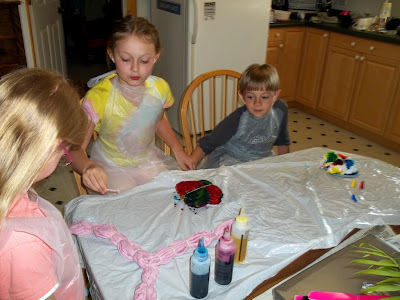 Step 3:
Time to apply the dye.  It was very handy having it in the squirt bottles and made it easier for the children to manage and less mess.  The girl's shirts started out being colored so their's dyed a little differently and was less bold colored than the boy's shirts that were white. 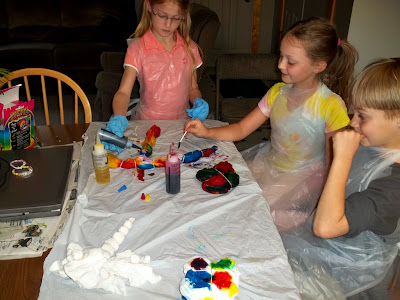 Step 4:
More dye applying, making sure that the front and backs are covered as thoroughly as you want them. 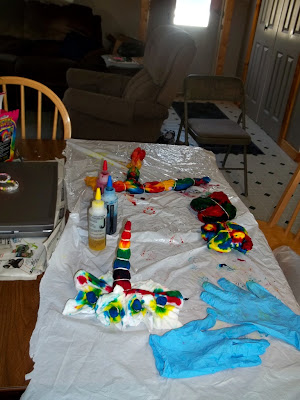 Step 5:
We wrapped them up in the plastic and let them sit for 24 hours for the fabric to absorb the dye.  As you can see they were all done differently.  Benaiah's is the one in the bottom left that looks like a point.  I made it rainbow with the children watching to see how to mix the three colors we had to get all the colors of the rainbow.  After they saw me do it, they decided to try it more on their own and did a really good job mixing the colors and blending where they wanted different colors. 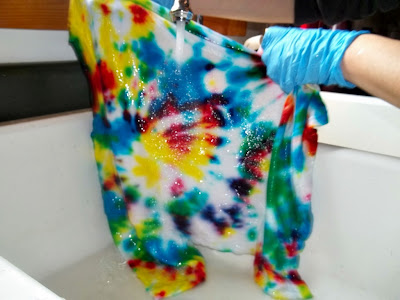 Step 6:
After the fabric sat for 24 hours, then it's time to rinse out the shirts, take out the rubber bands and rinse until the water comes out clear.  This was the exciting part for the children as they anxiously waited for their shirt to be opened up, so they could see what it would look like.

﻿ Step 7:
After rinsing, wash and hang to dry.  Look at all those colors! 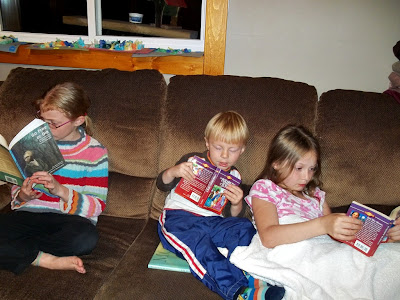 ﻿This doesn't have to do with our project, but is so typical of what our living room looks like on any given moment after school work is done or in the evenings.  Even Benaiah tries his best at joining the reading crowd.  : )

The school program is the end of this month, so be on the look out for that post.  It's going to be one of the best programs yet, so we are excited for it and enjoying all the preparation for it!