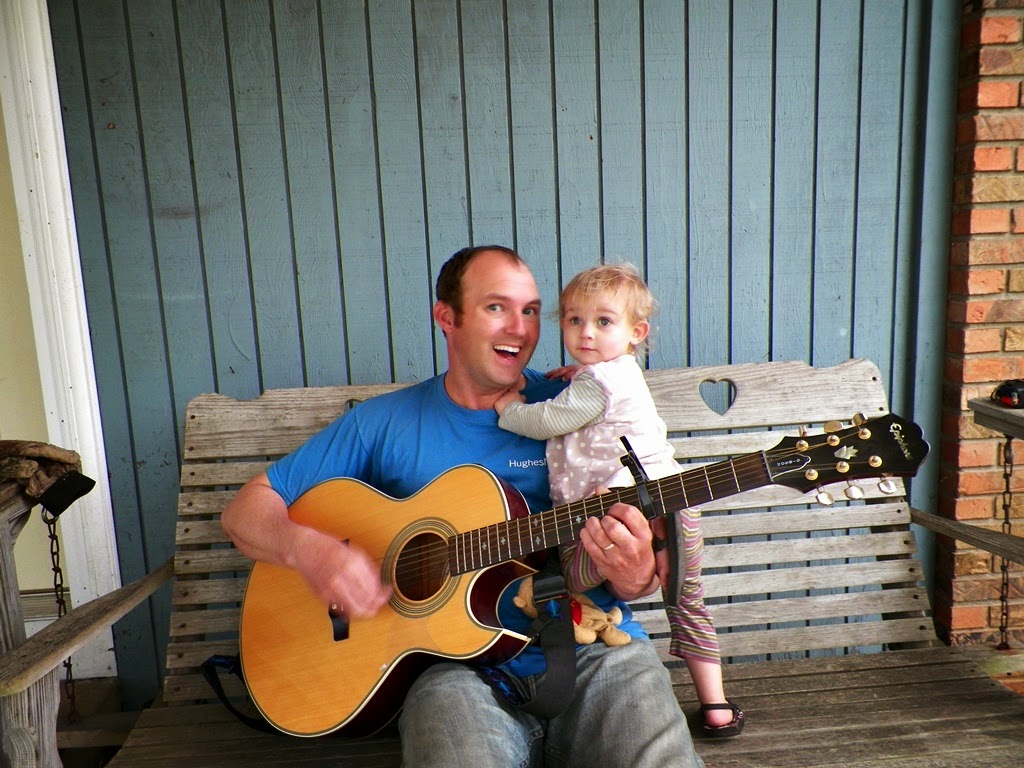 Music on the porch is lovely! 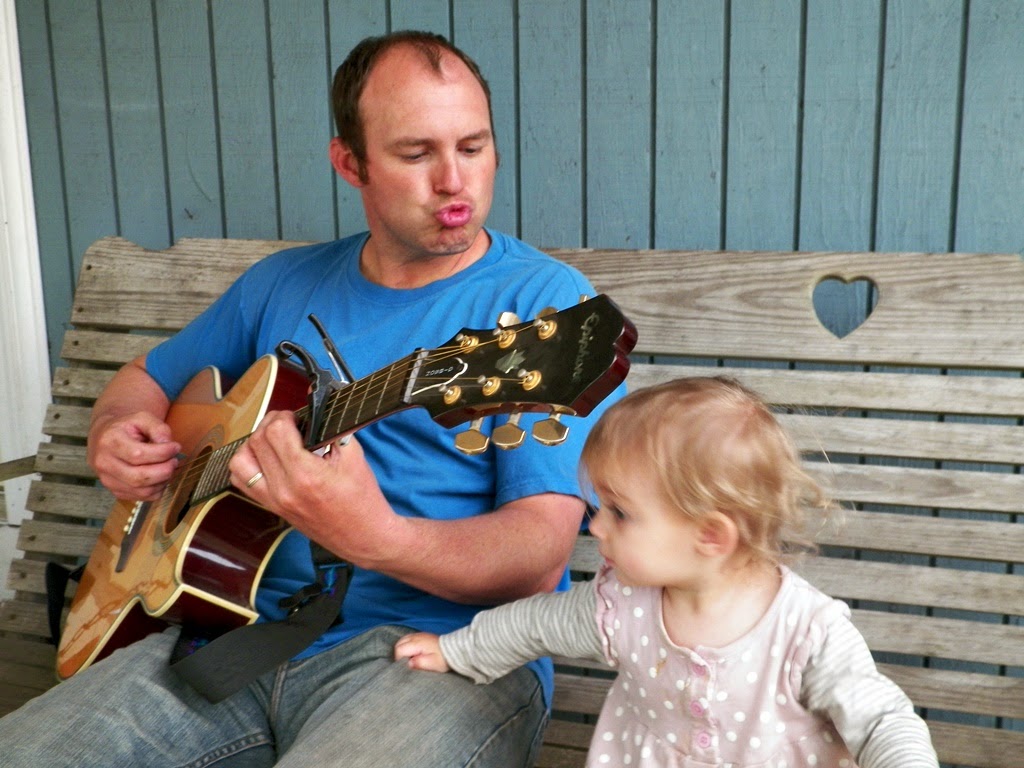 Summer days on the farm bring so much enjoyment.  Yes, it brings lots of work, but the thrills of summer and being outside far outweigh the hard work of the land and clean up around here.  The children have been learning some new things with the blueberry field and we're trying out a few new things in the garden too.  Looking forward to eating more produce when things start getting ready to pick.

The children have also been playing in some new locations.  Probably because they are far from the house, and I can't very easily come out and get after them about stuff.  Alegra must have taken the camera out one day because I found some pretty fun pictures that she took on it.  This is where they are playing more. 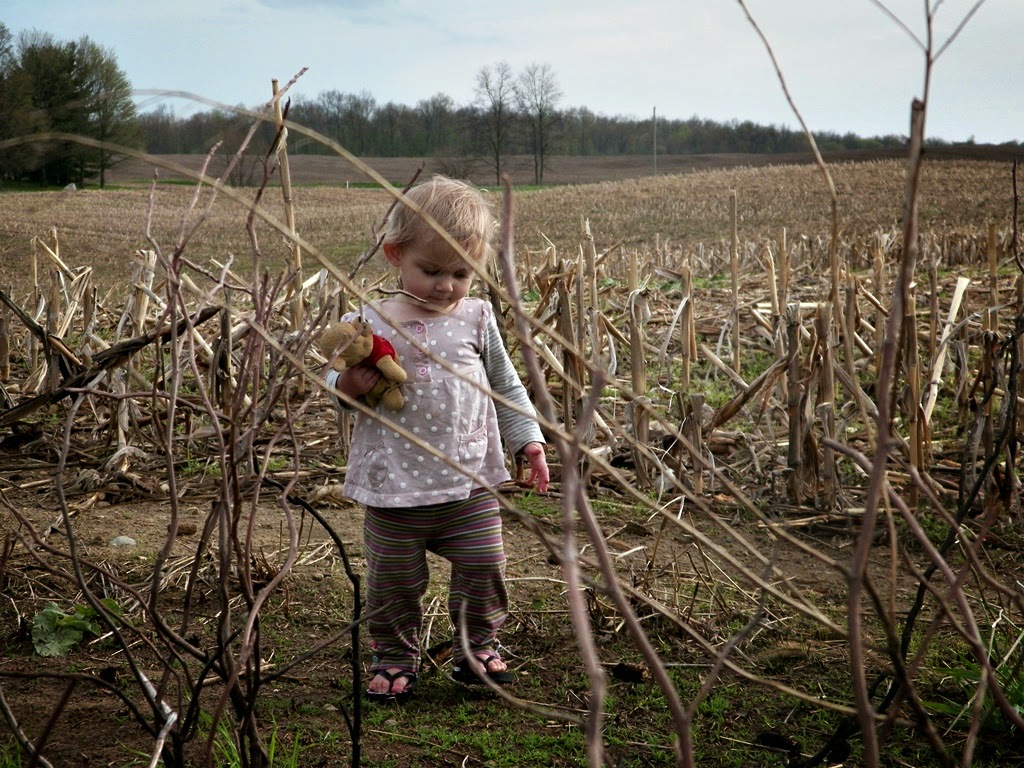 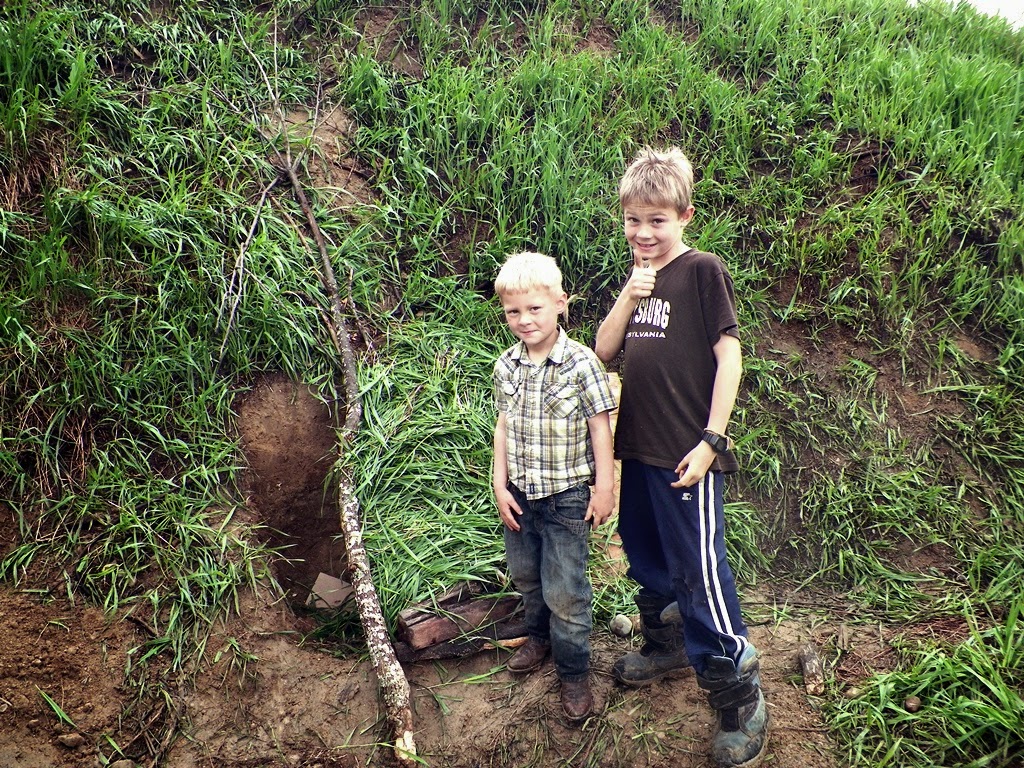 Digging a cave in the bank. 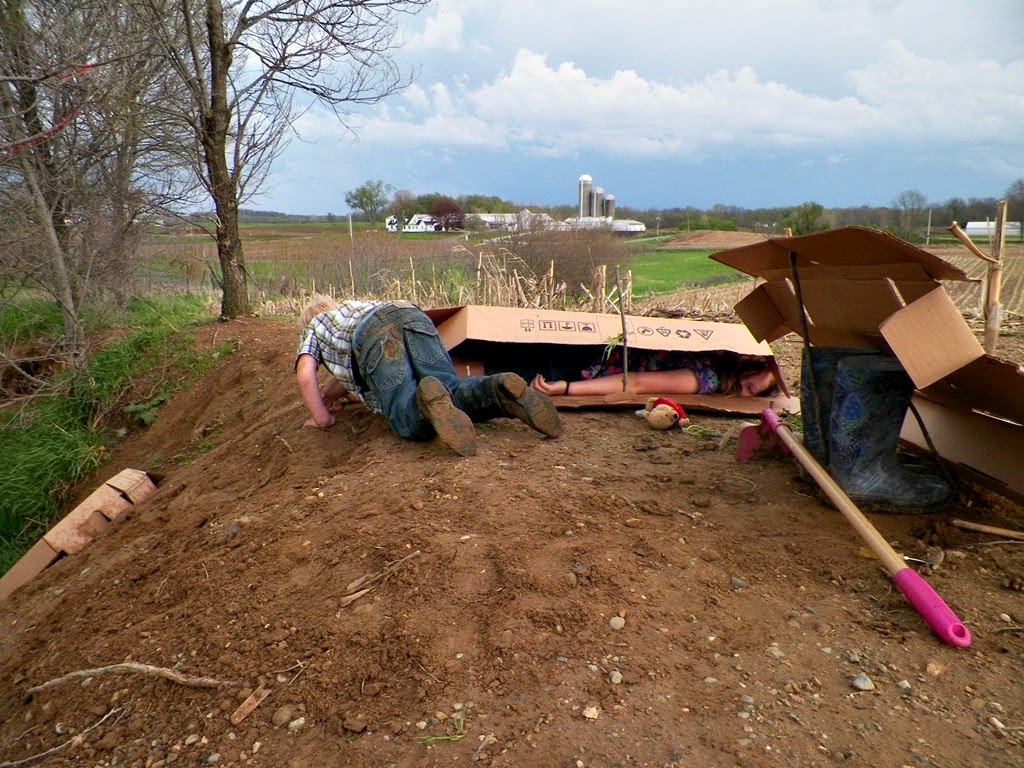 Not sure what the boxes are for.  Maybe walls for inside their cave. :)

The garden is really coming along this summer.  We learned a frost lesson with our tomatoes and peppers, but replaced them with plants from the FFA up at the school.  They have some really nice plants and heirlooms too.  Our flower bed for fresh cut flowers is almost completed, tomatoes, peppers, carrots, beets, spinach, half the corn, peas and beans have all been planted.  I'm sure the plants and seeds appreciated the rains last night.  Thank you Father for giving them just what they need! 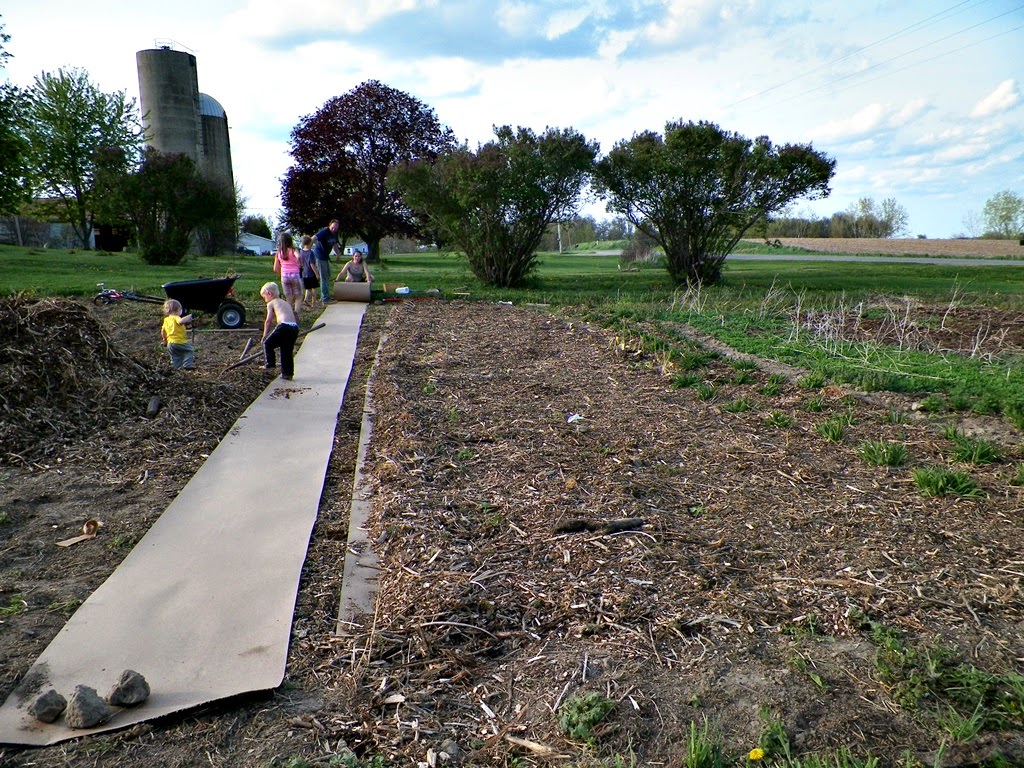 Last year we got a small portion of the garden paper and mulched.  This year we are hoping to finish it up and have a restful summer of play and not so much weeding.  God blessed us with Free mulch til our hearts are content this spring and big rolls of paper that should have cost quite a bit, but the company decided to give it to us.  Blessings, blessings!  So thankful for HIS goodness to us!

Still more to plant in the garden.  We've also added lillies to our flower bed area, tulips, and a couple other plants that the girls bought.  We worked on the back yard a bit last night, cleaning up some areas and adding irises that a friend gave me.  We moved our dinner bell closer to the back door, so in the winter months we can just pop our arm out the door to ring it instead of having to step out onto the porch.  We also are trying some strawberries again.  The chickens can't get to them now, but we'll see if the dog decides to do something to destroy them.  Last night we picked some rhubarb to go in our apple crisp.  What a delight to eat from our land, good and healthy food. 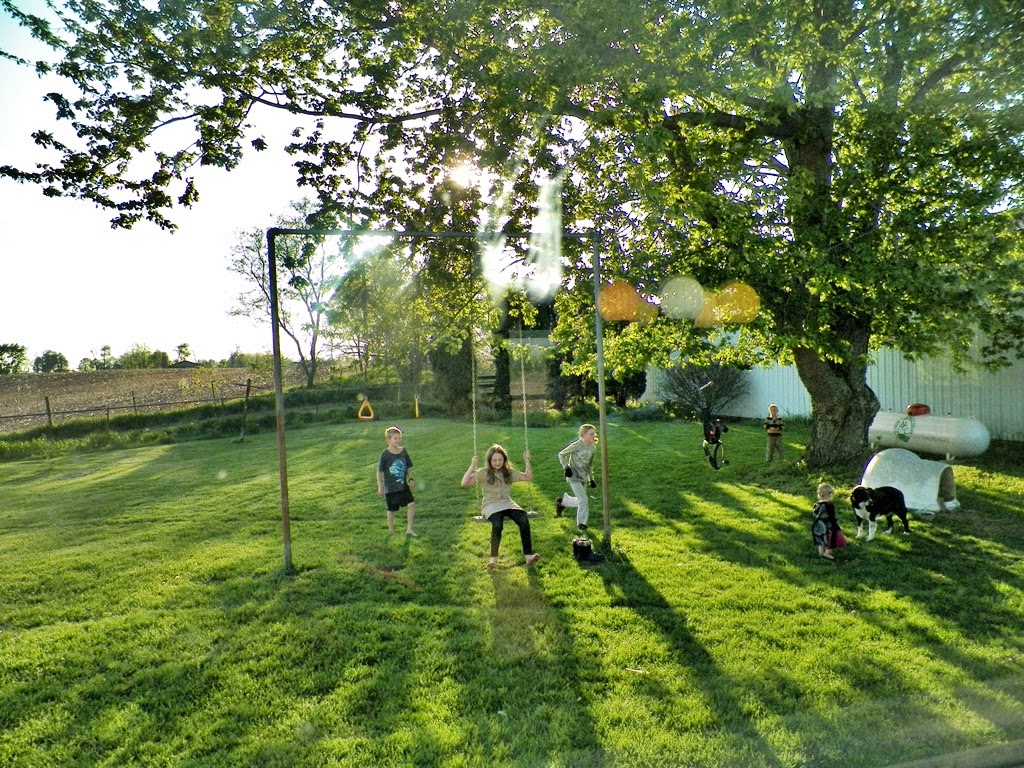 This is the view from my kitchen window.  Isn't it just grand?  When there is down time, the children can be found in the field walking the dog or playing in the backyard with him.  A dog who takes off running if the gate is left open, will now walk without being lead by the leash with the children in the field.  They've done a really good job working with him.  They all got into a little trouble for not doing their chores happily the other day, so I told them no walking the dog in the field until I see better attitudes about their chores.  Yesterday they were out in the field playing, and the dog ran to the gate and just started barking at them.  He rarely barks unless a siren is heard.  I'm pretty sure he was feeling left out that they weren't taking him to the field with them.  They've all grown to love him, even the non dog lover, Diella.  Saphira is most thrilled him.  She walks right over to his igloo that he sleeps in, calling him to come out.  He'll walk over to the doorway and stick his nose out just to greet her.  Sometimes she kisses him and other times she just keeps trying to call him out.  A dog lover for sure.  :)

Benaiah turned 5 this past week!  We plan on celebrating tonight for his birthday with friends.  The day he turned 5 was sure fun though.  We hung out around the farm and sang Happy Birthday to him and kept reminding him he was 5 now.  In the evening while we were working in the garden, he was out crawling around the alfalfa field.  He's so small you can't even see him when he's out there crawling.  Well, we had finished a row of planting and Jonathon decided he was going to crawl out there and scare him.  So, he stealthily crawled through the alfalfa trying to keep an eye on where Benaiah was going.  Benaiah was clueless as to what was going on and was in his own little world.  Oh, when Jonathon reached him, he scared Benaiah so bad!  Later, Benaiah told Jonathon that he didn't like that ground hog game he played.  Apparently he thought Jonathon was a ground hog.  That boy sure adds excitement and smiles to our lives.

Today we'll be going to pick up our friend's children to keep til the weekend.  With 9 children in the house it leaves no room for boredom, that's for sure.  Planning on going to a park, having a campfire for Benaiah's birthday tonight, and hopefully make some fun memories before greeting their parents who have been gone to the Philippines for a couple weeks.  Fun times and great memory making times.  Now, to go get ready for my day!