Down on the Farm

We're learning alot during this first year of calving on the farm.  Hopefully you met Briar, our first calf to be born, in a previous blog post.  His birth was amazing in that we watched the whole thing progress from start to finish.  He's a spunky little guy though, so we weren't able to get our hands on him much.  He has had a halter on, but he's not too fond of it (neither was his mama).

Our next mama due started labor in the late morning.  Jonathon was concerned she was having a hard time, but we watched and kept an eye on her.  Eventually we saw hooves.  Uh oh, back feet coming first is not good.  Jonathon had to leave for a short bit, but I kept my eyes on her and gave him updates as I could.  At one point I text him that we needed to help her when he got home, and only 8 minutes later I went out to check her and the baby was born.  Our first still born calf.  The mama licked, nudged, and kept trying to bring her baby to life with no success.  I'll admit, I did cry.  Watching that mama try so hard to get her baby up and not leaving baby's side was quite heart wrenching.  She stayed by that baby all night and the next morning, before she finally left it's side.  Jonathon went out and brought the calf up to the barn so we could bury it.  That mama mourned for 3 days, mooing sadly and going back to the spot where she had the baby.  It really was sad.  The farmer was just as sad to watch her grieve and watch the other mama moo at her like she was trying to console her.  The animal world is fascinating.

The farmer was even sadder when he realized that the calf was his first heifer.  Our first girl.  Jonathon, Diella and I dug a hole.  What a sad day on the farm.

A week later, I look out my kitchen window at the cows in the field and commented how that other girl out there sure looks miserable.  Farmer thinks she'll have her baby before the end of the week.  Next morning I'm taking a shower and Alegra comes in with news that there is a calf out in the field and it looks like the mama and calf are dead.  Ugh, WHAT???  Can't I just have a peaceful shower!  Jonathon had told me that when she went into labor, he wanted me to keep a close eye on her because she looked so big.  Why hadn't he mentioned to me before he left for work that she was in labor?  Did he even know?

So, I told Alegra to go out and check to make sure they were alive.  She came back with a happy, full of life report.  After I got out of the shower, I called the farmer, "So, you have a new member on the farm."  His response, "WHAT???"  He apparently didn't check on them before he left for work.  What a relief that her labor was during the night and all was well.  We named that cow Flo since she flowed on her own and she seemed to be a much more mellow mama than Blossom.  We were actually able to get to the calf to tag the ear (#2) and check her over.  We have us a little girl!!!  The farmer is so happy!

On day 2 he was feeling a little concerned about her because she was sleeping out in the hot sun all day long without nursing.  We walked out to check on her, where she let me really give her some lovins.  What a sweet, sweet girl.  She's got my heart.  I just might be turning into a farmer's wife, but, shhh, don't tell the farmer.  ;)  Alegra named this one, and her name is Fern. 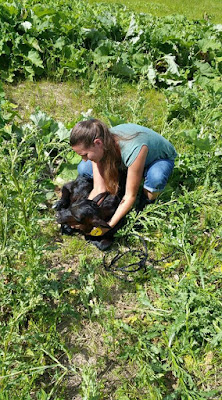 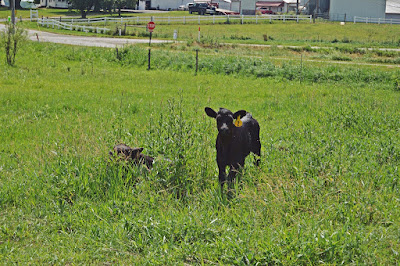 Isn't she just the sweetest thing.  Oh, and Briar is pretty fond of her too.  He was right with her in the field with her mama when we found them that first morning. 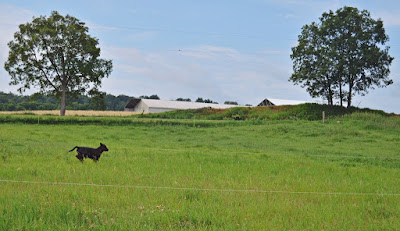 There is more happenings on the farm too.  We're waiting for one more mama to have her baby.  She's getting bigger.  She is one of our Herefords that was artificially inseminated, so she might have a cute little hereford calf.  We are excited to see what she has.  Our other cow may or may not be pregnant.  We aren't real sure at this point.  She wouldn't be due til a little later, so we watch and wait.  Rosie is up next though.

Jonathon has also been busy doing hay to prepare for winter.  He's such a hard worker and loves his animals.  Knowing that he has cattle and machinery back on the farm does his heart good and mine too when I hear him talk about it.  It's not a luxurious life, but it's our life, and we live it together, all while raising our children to work hard, love the animals and love the land. 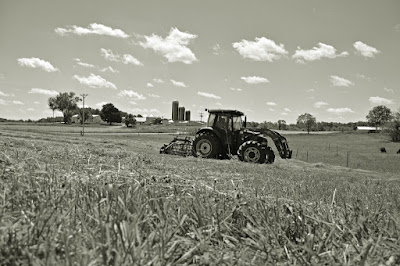 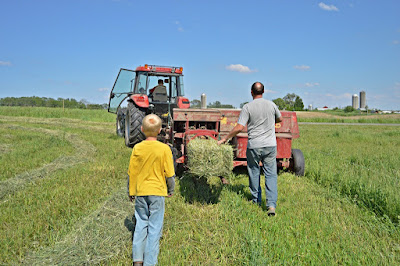 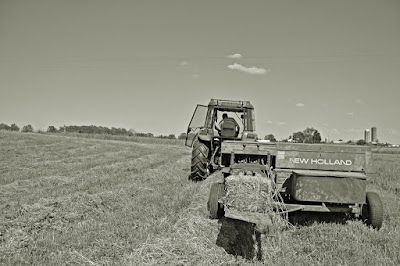 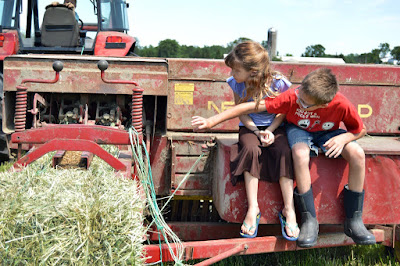 When you have a friend over who loves the country life too, she gets to learn how to bale hay. :)
And make lots of memories on the farm too. 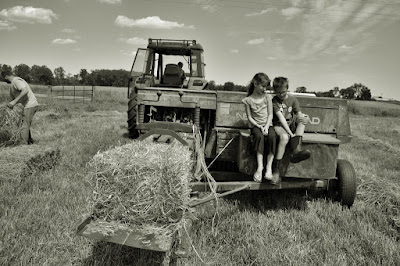 The garden is planted and looking pretty good so far.  Strawberry plants are growing and hopefully we'll have our own to pick next year.  Herbs are planted and getting established.  Our rhubarb patch didn't do so swell, but we'll plant again in the fall in the spots where it died.  We've got chicks galore and a crazy dog who thinks he's the keeper of them.  He loves getting in their pen and keeping them herded to the designated place he makes for them.  He's becoming quite the farm dog and making up for all the times I was ready to send him back to the shelter when we first got him.  It's taken a lot of training and he still has some areas he could grow in, but overall, I can't complain since he's cooperative with Hadassah crawling all over him and he doesn't mind all the little critters that are around here.  He's been hearing, "Good boy!"  more and more.