Yesterday was Benaiah's 1st birthday and boy did he have a good one! It looks like we are in for a messy summer with this little guy. He isn't afraid to go exploring off on his own, of course with the mama watching closely. 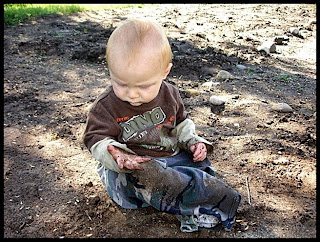 I was hanging laundry and turned around and he was crawling to the playhouse. Well, Jonathon was out that way, so I figured he was fine. Then I went out to the garden which is by the playhouse and we were working at building a little teepee structure that we planted morning glories at the bottom of to climb up in the middle of our wildflower patch. Well, we turned around and he made it to the garden. Right in the middle of it and looked like he was thoroughly enjoying himself. By then it was too late, so we just let him play. 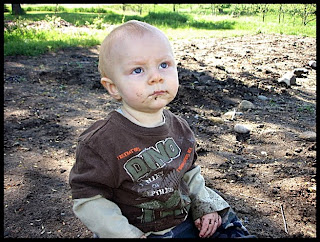 I'm not sure that he was very pleased with being so messy though. Looks like our summer will be filled with lots of baths for Benaiah. 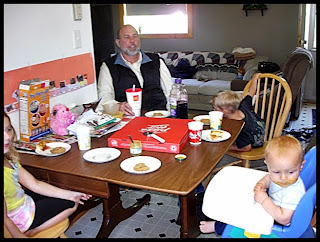 We got a surprise lunch guest who even brought lunch. Yummy! Too bad for Benaiah that he didn't get to enjoy any of it. The pizza and cookies were delicious! Benaiah had vegetables, turkey, and barley baby food. Poor guy! Ha! 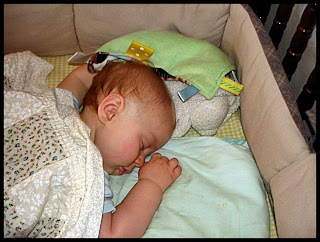 After his morning of play, he was a tired little guy. He took a looooong nap which was just enough time to let me get more laundry done, sweep and mop, and even take a short nap. 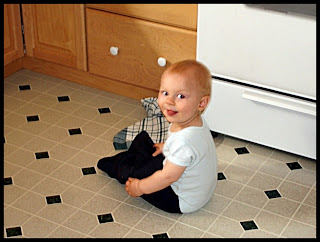 Nap is over, time to get back at it. He loves pulling my towel down off the oven. He is pretty good about staying out of the cupboards and drawers after much training, but he still loves to pull off my towel. No big deal as long as the floor is freshly cleaned. 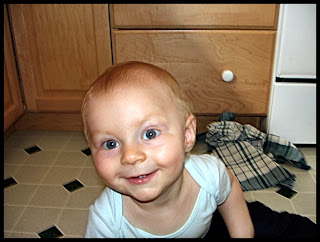 And then he realized that I wanted him to sit still so I could take a picture....or maybe he thought I wanted him to take the picture because he was on a quick path to get the camera, smiling the whole way. 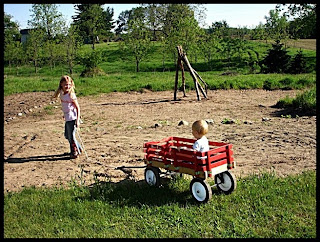 After supper we headed back outside to work in the garden. He had a bath before lunch, so I really wasn't excited about letting him play in the dirt again. I told the girls they needed to pull him around in the wagon to keep him happy and out of the dirt. He loves riding! 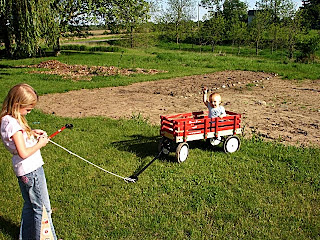 "Hi, Mom!"
He officially has the wave down. It's quite cute too if you can't tell from the picture. 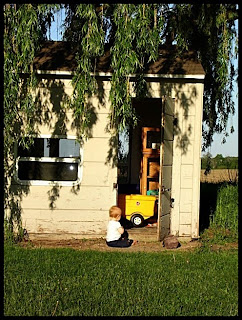 We were outside for such a long time that he got tired of the wagon, or rather the children got tired of pulling him and just left him sit. I entertained him nicely in the grass for a little bit with seed packets, but then his adventurous spirit kicked in again, and he was off. I watched him though so he wouldn't get into the dirt and would pull him back to the grass if he got over by the play house, but finally his speed crawling won out and he managed to get himself in the play house without me catching him first. Next thing we know, he is crawling ever so carefully back out again. It was quite cute.
We cleaned up all of our working messes, got the laundry in and closed up all the out buildings and headed in for showers all the way around. I think it was a good day for the little guy's birthday. Thankful for the sunshine that we could play outside most of the day and get so much accomplished. It looks pretty nice out there again today. One load of laundry to hang up and then we are off to do massages. The weeding will have to wait til tonight I guess. Ugh!

It sure looked like you had a fun day yesterday. I can hardly believe that Benaiah is one... which makes me remember where you were at a year ago. The LORD is truly amazing. It's been wonderful to watch Benaiah grow!