How many of us, when fall approaches, are glad for life to slow down a bit?  That's how it was for us this past fall.  We had a very busy summer with having baby number 5, remodeling Jonathon's family's farmhouse, and then moving into it.  That's a job!  We were so blessed with friends and family who helped us with all of these things to make it easier though!  But of course then winter arrives, and well, life hasn't slowed down much.  We all had that respiratory cough sickness that has been going around but have since been very healthy, and we are thankful for that!  Still praying that we stay free and clear from any puking sicknesses.  This will be our 5th year in a row that nobody has gotten that kind of flu.  Every year I bless the Lord greatly for that!!!!! 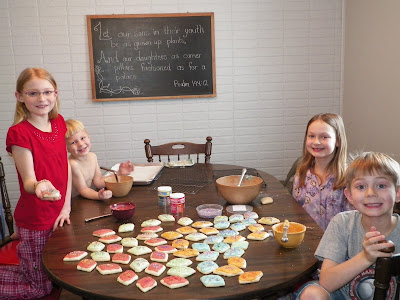 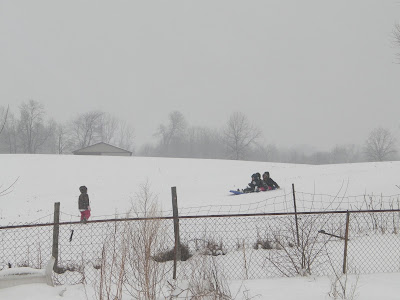 We've had many celebrations to plan and host and be a part of.  We enjoy celebrating life with others!  We've also been busy getting things cleaned up around the house and all of our belongings moved into place.  And with being in a bigger house, we've also enjoyed having family and friends over more than we could at the other house.

One of the most recent parties we participated in was a Purim party at First Fruits Fellowship.  I believe we all enjoyed reading and learning about Queen Esther during the week leading up to the day.  So many little details in the story that can often times be missed.  My favorite aspect of the story is how she so bravely went to the king with what Yahweh directed her in doing.  She told the king that she was a jew, something he had no idea about.  And because of her doing that, she saved her people from death.  It caused me to think about whether I am brave enough to share with others the faith that I live or if I just keep it quiet and live it in my home.  It challenged me to live my faith more out loud no matter where I'm at.  One day it could cause someone's soul to be saved by the testimony that I live.  Have the bravery to face those in higher positions or even a neighbor or family member and share the truth with them.  It could vey well save a soul from everlasting death.

So, here are a few of the pictures taken at the photo booth that we set up as part of the fun. 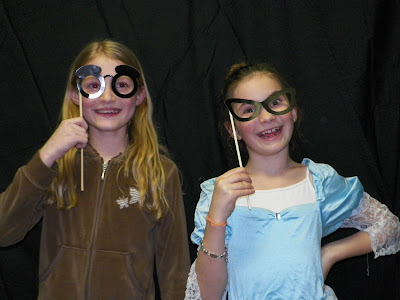 Alegra and her good friend, Elli. 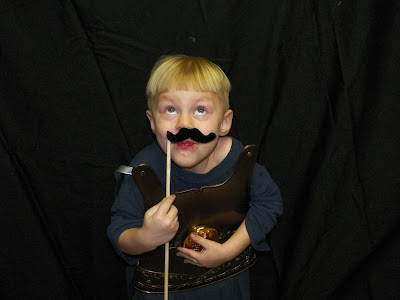 Benaiah and his crazy self.
﻿ 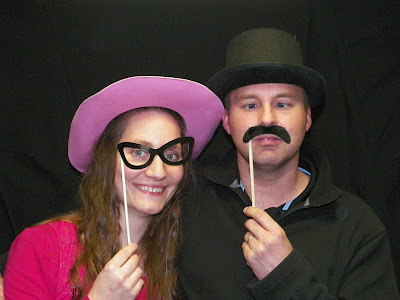 Jonathon and I.  I think he needed the glasses to help his eyes. : ) 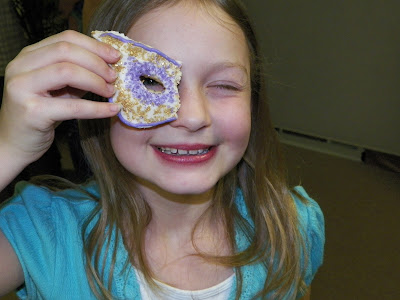 Time continues to move along and I found myself remembering that Saphira was going to be 6 months old!  She is such a joy!  I know I always say that, but it's true.  She brings joy and smiles to so many people.  I am blessed that other ladies who are beyond child bearing age can hold her, and she just smiles at them and quietly snuggles in to fall asleep.  It's a small thing, but I know it touches their hearts as they aren't able to have any more children.  She is still quite content just being still.  No rolling over or sitting up by herself.  She gets mighty close to rolling over, but just doesn't go all the way.  She loves playing with her feet, spitting all over herself, smiling, listening to all of us sing and play music, and she has her first tooth! ﻿ 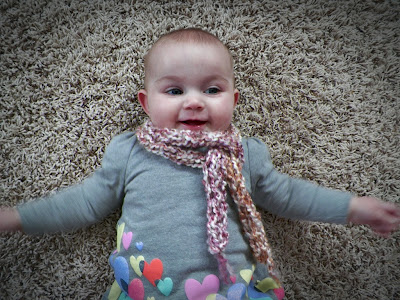 Saphira, 6 months old.  Diella made her scarf by finger knitting.  We decided she needed it for this months picture.  It is rather cute on her.  : )﻿

Someone gave us a Time Capsule for a wedding gift that was supposed to be opened after we'd been married for 10 years.  Well, obviously time got away, and we just now got to opening it, almost 16 years later.  After realizing that I spend a lot of time blessing others with celebrations, I decided that it was time that I honored one of the most important things in my life- my marriage.  So, I put together this little date night in for Jonathon and I.  I titled it "Time Flies" where we opened our Time Capsule, discussed and wrote out goals for our family, and then chose something fun for "Time flies when you're having fun".  It proved to be a great way to spend our evening with each other and showed that our marriage is priority in our family.  So many times couples end up putting the children first by running them to this activity or that activity or focusing all of life around the baby, and it eventually pulls the base of the family apart- the parents.  We've always said that we were a family before we even had children.  They were added blessings, but not something that the family would then be geared around.  So, when we need time, we take it and either find a baby sitter or tell them to watch a movie or read, so that we can have adult conversation uninterrupted.  It isn't always uninterrupted because we're still dealing with children, but if we don't make an effort to do things for just the two of us, then we'll never keep the fires going.
﻿ 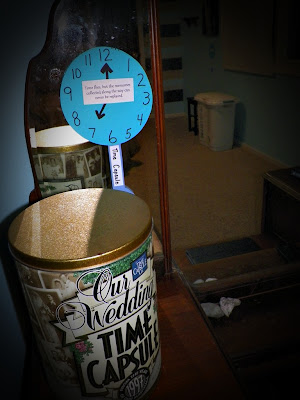 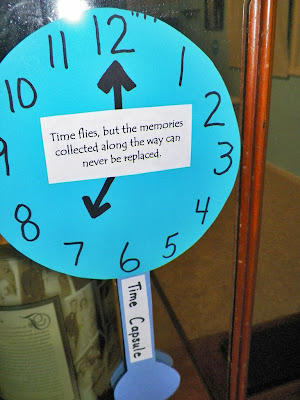 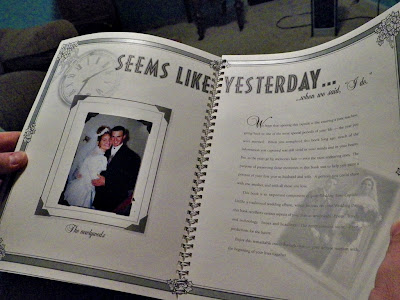 We asked our families to write letters with information about their lives, or about something going on the year we were married or just their encouragement for us in marriage.  It was a blessing to read through those.  Especially from those who have passed away since we were married.  Those are treasures worth more than most material things.  I think we are going to have our children write some letters and put them in it to be reopened in another 10 years.  And I think it's a great idea for us to put together one for others as a gift. 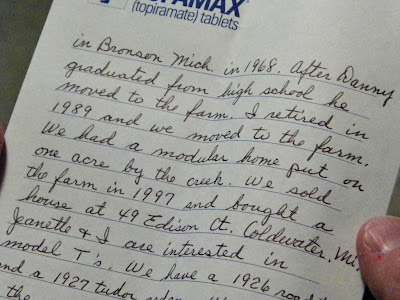 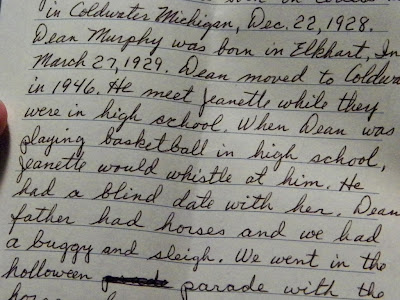 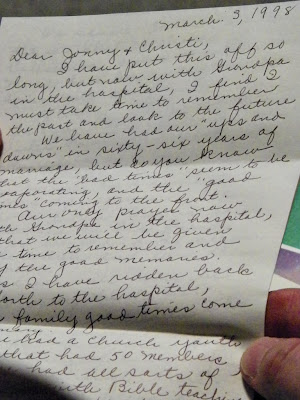 We've had some changes around her lately.  But so many blessings have come along with the change.  We sit and marvel at what the Father is doing in our family.  The vision that He has given to me and Jonathon and the excitement that stirs in our house regarding where we feel Yahweh is leading us is a blessing in itself.  Since last summer we have felt so blessed and can only give God the glory for everything we have.
Blessings-
~ A beautifully perfect homebirth.  Everything I desired.
~ A beautiful baby girl.
~ A bigger home to give us more space for our growing family.
~ More space for Jonathon's business materials.
~ His business staying busy.
Recent Blessings since obeying His leading in our family-
~ Three songs that Yahweh has given us after prayer for songs.
~ Clarity in His Word.
~ Sweet moments with Him in devotion and meditation on His Word.
~ Growth in our marriage as we seek His Word together.
~ Hearing testimonies of our family being a light to those who don't know Him.  That's exciting!!!
~ A buyer for our Michigan house- Yes, it's sold!!
~ A vision for our family and how we can serve God together.
~ Answered prayers in Jonathon getting more sales jobs through Hughes Net, which boosts his income and allows him to be home more.  The last week has blown us away at the phone calls for sales from people we don't even know.  The Father knows them though and is sending them our way.

Sometimes seasons in life are filled with trials and other times they are filled with abundant blessings.  Sometimes it takes hard choices and much seeking the Father in His will and direction for us to choose righteousness, which brings blessing.  His Word says in Deuteronomy that obedience brings blessing and disobedience brings cursing.  We have always reminded our children of this to hopefully spare them from harm that were a result of disobedience.  But when we see the results of obedience, it really encourages us all to continue being obedient no matter the cost.

So, that's a catch up in what the Lord is doing in our family and what we've been up to this winter.