First Calf on the Farm 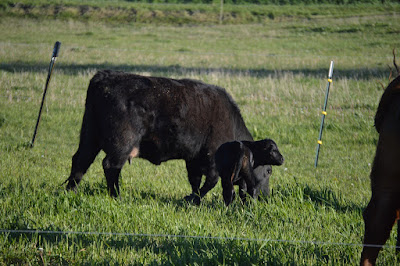 We've been waiting for the day that we would have some new little ones to welcome on the farm.  last Tuesday was the big day!  We knew the day was getting closer, but we weren't really sure how close.  We know of a couple signs now to look for when the heifer is within a day or two of having a calf.  The children had a couple friends staying with us which made it all the more exciting that we got to share the moment with them.  The only sad thing was that farmer Jon missed it all.  He was so sad about it but was afraid he might have been a nervous papa in wait if he would've been here.  Instead, I got to keep track of the mother and how she was progressing, report in to the farmer, and keep myself from being nervous.  I kept her covered in prayer that all would go well and she'd deliver naturally without any complications.  I sure was thankful when it was all over with and everything turned out perfectly.
We were sitting at the table working on school when Benaiah said, "Mom, I think something is coming out of the cow".  Sure enough, I looked out and quickly put on my shoes and coat to go out and get a closer look.  Looked like things were just starting from the outside appearance, but I have a feeling she was already having contractions and working on it before we could tell.
We kept at our daily routine, but I went to the window often to check on her.  We were all so thankful that she chose to be in the closest grazing area to the house, which happens to be on the side with easy viewing windows.  After awhile the girls came downstairs (they were watching from their bedroom window) and said, "she is laying down and can't keep her legs together".  Okay, I'll check.  Then Jonathon's brother stopped on his way back to work to let us know we had a baby coming.  I looked out the window and sure enough.  Bundle up children, let's go!
The older children and one of their friends joined me and out we went to watch the happenings.  It looked quite gross and the girls weren't real sure of it all, but what an amazing feeling to watch the birth of our first calf.  I kept praying for her and quietly coached her as I would a human mama in labor.  :)   At this point, the other cows were still in the area, but they were a bit away from her and grazing without taking notice of what was going on with her. 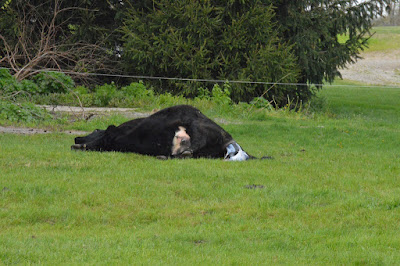 This is how we found her.  Quite uncomfortable. 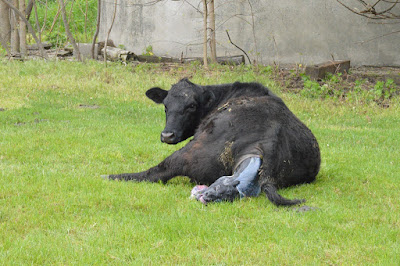 Right after we were all out there and looking, she gave a good push and out baby came halfway. 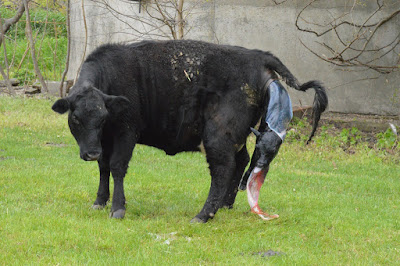 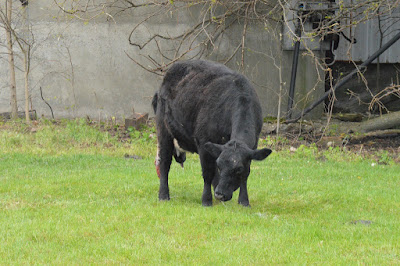 Baby stayed in that position for awhile, mama sat down on her hind quarters, then stood right up and out baby came. 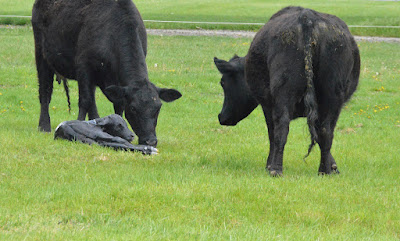 Immediately, the other cows stopped grazing, looked over at her and after a 2 second pause from all of them, they all walked over to her.  She was busy cleaning baby up, but the other cows formed a  circle around her and looked at the new arrival for a good bit before they walked away and continued grazing. 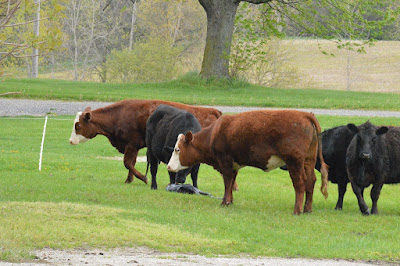 Checking out the new member of the family. 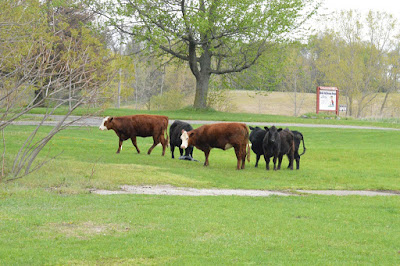 We made sure baby nursed and got up and walked around before we went in.  It took some time, but eventually all was fine and mama proved to be a good mama.

After Farmer Jon got home, he met me out by the fence to see the new little BOY.  He's a handsome little guy and full of spunk.  The first couple days he did a lot of sleeping, which made us wonder if he was dead or alive.  BUT he is quite alive and the cutest little thing. 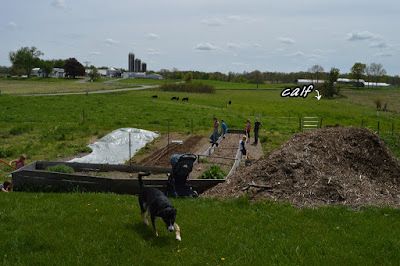 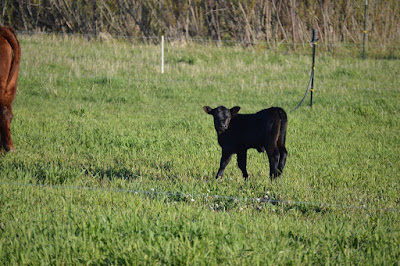 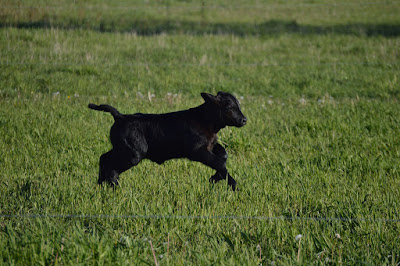 Isn't he just so cute? 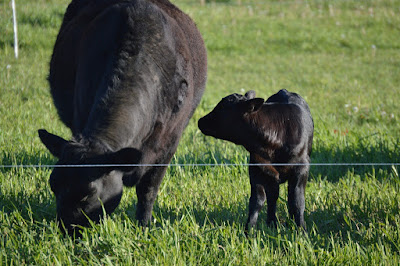 He's going to be a strong, young steer someday.

Journeys on the farm continue, and we feel blessed to be a part of the rebuilding of the Bovee Farm.