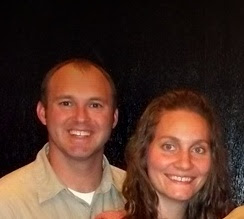 Most of you know us and our story.  But because other's stories similar to our's, touched my life when I needed to hear it most, there might be somebody out there reading this that needs to be encouraged in their marriage as well.  I pray that this encourages you to grow and change in your marriage.

By Christi~
We married young, just shortly after high school.  We had our share of mistakes in the dating area that we'd both change if we could.  It's too bad we have to go through life to really understand some things.  Especiallly those things that can affect us into our marriage.  Believe it or not, all decisions made not only affect ourselves as individuals but everyone around us, even if you don't think it affects them.

We were in love on our wedding day.  Who isn't really? : )  We had an adventurous honeymoon that we will forever remember.  It was simple and not costly, but a tornado ripped through the area where we were staying, so it did change some of our plans.  If we would have only known then that the tornado during our honeymoon would be a vision of what was to come, we may have prepared ourselves more.

Shortly after we were married, I became sick with mononucleosis. Doctors couldn't seem to diagnosis it and one thing led to another, and I was having major problems with my health.  That really tested out our marriage straight from the get go.  Time passed, we were figuring out my health issues, built a cute little house and were expecting our first baby.  Life was good, but things always felt a little rocky.

It wasn't until after our second child was born that we hit bottom and all of our issues we had been having came through in actions of our hearts.  We both take the blame for it.  If one of us would have stepped up to the plate and not been selfish in our marriage, the other would have followed behind, pulling their weight as well.  It takes two to accomplish a lot in marriage.  But it also takes two to destroy a marriage.

I was living with the girls as Jonathon had decided that this wasn't what he wanted for himself and was off in another relationship.  I spent days and nights on my knees praying, studying God's Word to see where I failed.  He quickly showed me that I was just as much at fault, and He began revealing those areas that I needed to improve on.  After some time, much heart ache and doing my best at obeying God's voice in leading me to say and do what He wanted in the situation, the story changed.  Jonathon began seeing the change in me and desired to come back home, but was just afraid that things would fall back into the same routine as before.  I couldn't make promises of that not happening, but I could make sure that every day I woke up I could determine to live unselfishly.

God truly did restore us back together.  It wasn't with a snap of the fingers but with much patience, love and determination to not let the enemy win in the spiritual battle that was taking place.  We may think that other people are after us or are haters, etc. but really it's all spiritual battles.  The enemy does what he can, to whom he can, to rock boats to cause a falling away from the true Saviour.  It sure takes effort to not allow that to happen, but it's so worth it.

Nine months after we reunited in marriage, our first son, Josiah Harron was born.  Josiah means, whom Jehovah has healed.  He was our sign that healing truly did take place, and we blessed the Lord for his life.

I wouldn't say that everything has been smoothe sailing since then.  Oh no!  There has been much for me to deal with in relation to the choice that Jonathon made.  I still struggle at times even though he has reassured me of his love many times over and over.  But again, the enemy uses what he can to stick his foot in the door to cause problems, and he knows that this is an area he can get me in.  I have to be firm in not letting him get the door open even just a crack.

We now have 4 children and another one due the end of August.  Sometimes I wonder why the Father has given us these children, but these are lives that He has created.  I shouldn't question but rather be blessed by them and be sure that I am training them according to His Word.  And I pray that as we live out our marriage to the best that we can, our children will also learn from it and be led by His Spirit in walking with Him in their marriages (if we ever allow that to happen). : )  None of us are perfect and there are always areas that we can improve upon.  I wouldn't have become aware of what I needed to do if I hadn't of gone to the Father with a heart that truly wanted to see the faults and change them.  He is faithful to be by our side when we really desire His leading and guidance.  Go to Him.  Only He can restore and make whole again!                ﻿