The life of Benaiah

Well, it seems time just doesn't stand still. I was over visiting one of our friend's homesteading websites, checking in on their family life, and realized that it had been awhile since I had reported about my own family life for all of you (whoever you are that read this). :)

Anyways, days with Benaiah are getting so much fun. His laughter would make anybody smile, his spit on his chin would make anybody...well...wipe off his chin, and his stories, oh boy, he's got some grand ones. His family does love him oodles! Below is a picture of one of his sister's head bands placed on his head by none other than his dad. What???? I didn't think his dad liked him in girly things. Well, honestly it makes him look more like a jogger with a sweat band. Cute anyways. 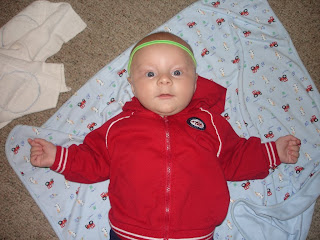 This is a picture of him laying in Josiah's bottom bunk bed. Diella was in charge for a little bit (she loves that role), and I guess she thought he needed to go to bed, and was obviously right. This is where he ended up and sound asleep. I am trying to get her to put him farther up on the couch beds, but she just isn't getting it. Thankfully he isn't rolling or moving that much....YET. 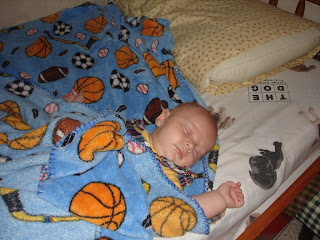 We are staying busy these days and getting geared up for winter. Blah!!! But in this neck of the woods, has to be done. Well, I have another post to write then to the kitchen to fix some supper. We are studying transportation right now, so I think after supper we will make a train. Maybe a post will be added about that later on.