Well, we haven't done so well with field trips this year. I don't know, maybe it's because I have another little body to keep track of that is causing me to not be as excited about going out with all four of them. :) We do however get very excited when the Davis Mercantile in Shipshewana has their Homeschool Week. This year a small handfull of us from church went along with Grandpa Daniel and Grandma Deborah. We were glad that Grandpa Daniel could join us since he doesn't get to spend very much time with the children. It was a fun day!

For the Homeschool Week some of the stores participate by doing an I Spy themed treasure hunt. Tokens for the carousel are hidden throughout the building for the children (or adults in some cases) to find. And boy did we find them! Carousel rides for everybody! Yay!!! And they had to read clues and do different things with counting or figuring out answers to questions that pertained to the store. This year two of the stores had coloring contests which made my children really excited. We had just been talking about coloring contests and they all wanted to enter one, if we only knew of a place that was having them. That was answered and they all colored great pictures! We'll see if anybody from our group wins anything. 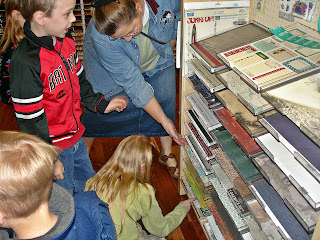 In the Scrapyard, we had to count how many different kinds Shipshewana paper that was. I was very surprised at the paper. I had no idea Shipshewana had their own paper designs. Here is a small example of what they had: 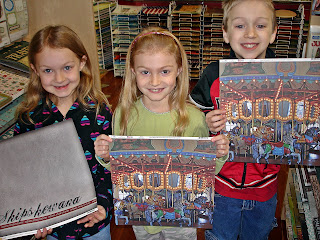 Diella's just says Shipshewana at the bottom and Alegra's is an actual picture of the carousel. Very neat! 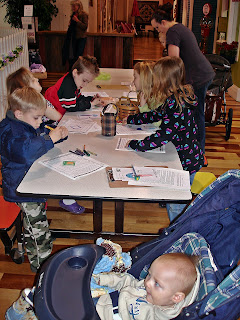 After all of our clues were found, we headed upstairs to the coloring table where they created their masterpieces for the coloring contests. They were busy at work! 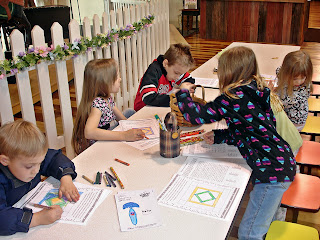 They had to color a Kooky Pen for the Kooky Pen Club and a quilt square for a gift certificate for the Mercantile. 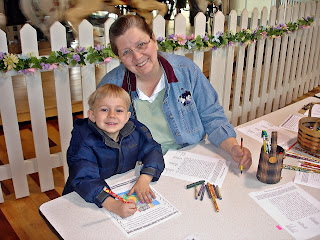 Here Josiah is coloring and grandma is doing his word search. Those were very hard and they were tricky in not making them all the same. They all had the same words but the mixed up the letters. I guess they didn't want any cheating. Does grandma doing the word search count as cheating? :) We didn't turn any of them in because they were just too much for my aged children. 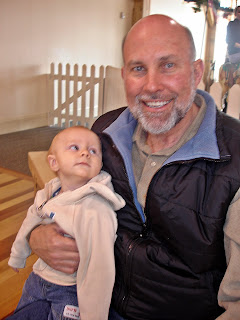 Benaiah Daniel sure is fond of his Grandpa Dan. As you can tell from his gaze. It is moments like this though that makes me wish that he could have met his grandpa Byron too. He would have loved and loved and loved this little guy.
After coloring and a carousel ride, we all walked to the park to meet up with the other half of our group who were coming to do it all in the afternoon. We had a nice lunch together and then headed back to the Mercantile for the movie and a nice little music lesson from Simple Sounds about instruments around the world. After that, it was pretzel time! Yay, our favorite part! 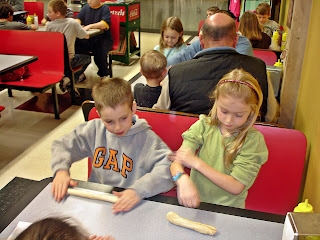 They gave the children a short history on pretzels and then gave them each their own chunk of dough and let them roll and twist. Here, Zeky and Alegra are really getting into it. Gotta roll those sleeves up even. 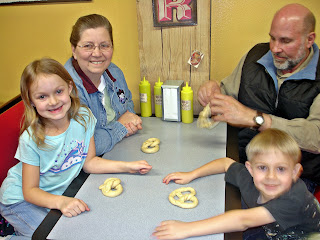 Pretzels finished and ready to be baked at the table. It was fun to see how everbody's pretzels were different, and yet they all ate them the same. 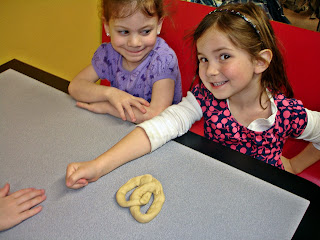 Aubrey and Elli worked at one together. Great job girls!
Time to head to the Murphy's. Grandma Linda and Aunt Mandy came and picked up the three older children for some fun at their house while Benaiah and I stayed at Dad and Mom's to give them massages. After mom's massage, here is how I found the two boys. What a tiring day apparently! 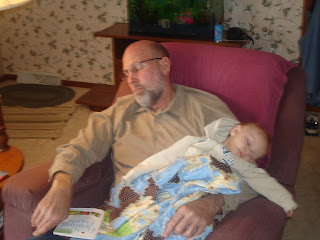 A fun day was had by all!