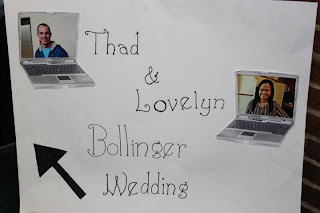 We set out to outdo ourselves this time with planning an anniversary celebration and it turning into an actual wedding. The story of the bride and groom is so amazing, it would take me too long to recap it, so just know that these are two special people who got married a year ago, as soon as she got here from the Philippines, and because we never recognized their new marriage, we thought we better do something at their one year anniversary.

With them really wanting a ceremony, we thought maybe we could pull off planning a surprise wedding for them and them think that it is just a "celebration for their anniversary". Well, we successfully accomplished the surprise right up until two days before when we told them and had them try on the clothes we had gotten for them.

We had all the details worked out, buying everything that needed to be purchased to do a beautiful wedding that the couple could hold dear to their hearts. Everyone from church donated to the cause and overwhelmed us with their generosity. We had great ideas and all of them were done thanks to everyone pitching in as a community and making it happen.

The above picture is the sign that I made with their pictures on laptop computers as this is how they met and communicated with one another. The computers played a vital role in their relationship blossoming. Oh the things that technology can do these days. = ) 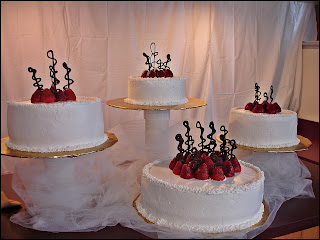 The final day came of decorating and getting all the food ready. We did have everyone bring snacky foods, but I made the cakes and some other ladies helped out in making chocolate covered strawberries for the centerpieces. These cakes were so much fun and looked amazing with the white tuling around them. Celebratory cakes for a time of celebration! 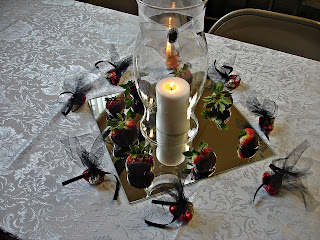 These were our centerpieces. The strawberries and then hershey kisses wrapped in tuling. Was delightfully simple and worked perfectly. The table cloths were a super blessing! We had some cloth table cloths at the church but nothing that was really nice. One of the ladies from church volunteered to make table cloths and they were so beautiful! We will have them for many more wonderful celebrations. 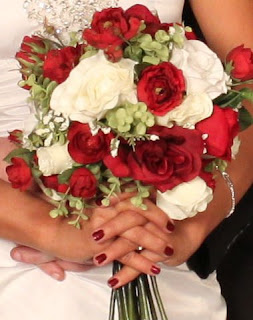 Since I certainly couldn't pull off a grand event as this by myself, I had some amazing helpers.
The bouquet above was put together by another one of the ladies. I was able to go shopping in my mother-in-law's craft basement and get most of these flowers for free which was such a huge blessing, but the rest were bought to fill in the gaps. It turned out gorgeous and fit so wonderfully with everything else. 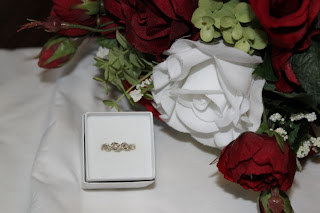 This was one of our last minute blessings. We had some people donate money to us last minute and the mention of a wedding ring for Lovelyn came up and we thought, "extra money=wedding ring for Lovelyn", so one of the ladies went shopping the day before the wedding and found this amazing ring for the bride. It was beautiful and you will later see the reaction from the bride when she got this put on her finger. = )
After all the details are worked through, put together, things decorated, thoughts and ideas covered, and a scurrying around wedding planner (that was me), we were able to finally start the wedding. We had ladies volunteer to fix Lovelynn's hair, the girl's hair, do fingernails, makeup, buy jewelry for her, make a veil for her and whatever else needed done. I couldn't have gotten all this accomplished without the help of all my amazing sisters at church and ultimately the Lord orchestrating everything to work so perfectly. Now let's have a wedding!!!! 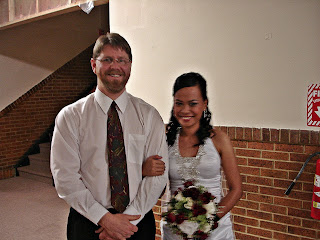 Here Lovelynn is with Gary, the one they wanted to walk her down the isle. She looked absolutely stunning in this dress that was found for her. Her nerves were at an all time high, but beauty covered it all up. After we filled them in our wedding ceremony plans, Lovelynn had some things that she wanted in her wedding. I had their wedding all planned out but certainly wanted her to include what she wanted. She put together a slide show of pictures that played while people were coming in, with music that she chose and wanted to be a part of her special day. We kept most of the music that we had picked out for them all except the song that she came down the isle to. A girl has to have her own song for that for sure!
The wedding was late getting started but it was okay. We wanted to have her family from the Philippines join us via Skype, so we waited a little bit longer to get them connected. Thankfully, we were finally able to get her mom and brother on. But as Lovelynn came down the isle, the screen showed that we had lost connection and Lovelynn's face showed disappointment. Not to fear though, because our Skype guy got reconnected with them and they were back on for most of the ceremony. I was so glad that he got that working and Lovelynn could have her mother join her. 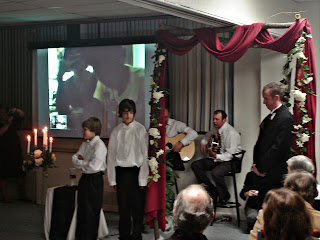 Here is a picture of Thad and his boys waiting for the little girls to come down the isle, the musicians singing a song called "Your Side of the World" and Lovelynn's mom and brother watching via skype on the screen. 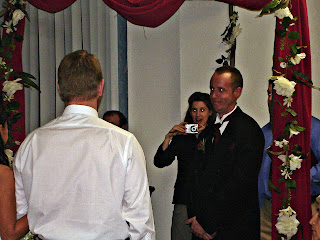 There is no happier face than a groom's when his bride comes down the isle. And his sister in the background videoing for him with her face being just as surprised at Lovelynn's glow. The ladies did a fabulous job at helping Lovelynn's beauty really shine. 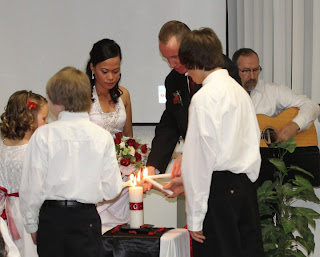 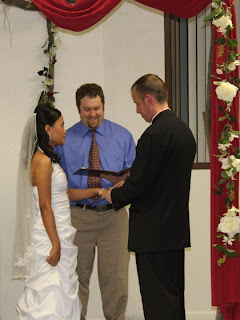 This is the unveiling of the wedding ring for the bride. I think she was wondering if her beloved groom bought it for her. Nope, they have a church family that loves them so much to make this a completed affair with a wedding ring. 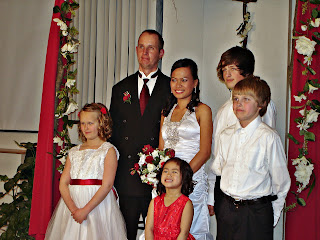 And here is the Bollinger family after the ceremony getting pictures taken. The pictures all turned out so nice. 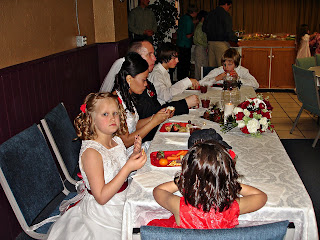 Eating time! There was such an assortment of goodies brought in. It all looked amazing! I didn't get to try too much as I was busy running around, but I did sit for a moment and have some cake. 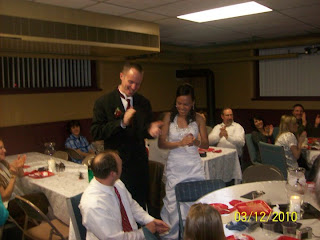 Jonathon wrote a lovely song for the couple. It was to the tune of the Beverly Hillbillies so you can imagine how wonderful it was, but it did bring many laughs from everyone and it really was a hit as you can tell from the applause he got in this picture.
We also reserved a night for them at a Bed and Breakfast in Middlebury. We had families take their children, and we quickly got them sent out the door. I am sure they would have liked to have stayed and fellowshipped with all of us, but their evening wasn't over. So, we rushed them to get changed and then everyone met them outside with glow sticks. 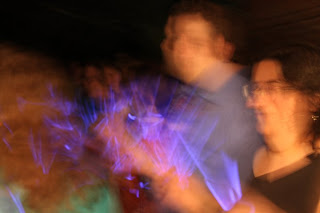 There are no pictures of them coming out with the glow sticks all around, but there were some of the guests waving their glowsticks. It was a great effect for leaving in the evening. Good thing we didn't go with the candle idea because it was windy and they would have never stayed lit.
Back inside we all went to start the clean up. Everyone pitched in and things were cleaned up and back in order for church the next day. It was a busy evening, but well worth it! I heard lots of people say it was the nicest wedding they had ever been to. That's because there were so many people helping, covering areas that needed covered and making sure that this couple got the royal treatment. It helps to have so many people planning an event. Thanks to all of you who helped, pitched in, and made it a dream come true for Lovelynn. It was a blessing to them and to those of us who planned it.