My parents wanted to take me out for a meal for my birthday that was a little while back. Well, with it being Labor Day the place we picked wasn't open, so we ended up going to a little, small town restaurant. Then I had a letterboxing adventure planned out at a park in the same town. It was a park that had been donated by a man who owned a cement company. The uniqueness about this park is that it contains 17 bridges that all look like they were made of wood/logs, when in fact they were all made of cement. What a neat place to visit. The park contained 7 letterboxes but we found only 1. It was a slight bummer, but the park was so enjoyable that it didn't really matter that we only found one. 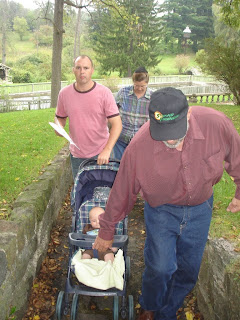 Following the clue up to the top of the hill where the tall trees and the historical marker were. 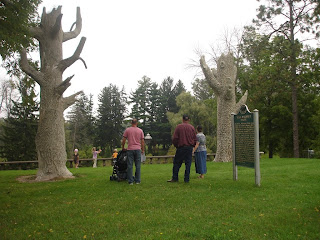 These two tall trees were the chimneys of a building that was underground below us. The trees are made of cement. So amazing! 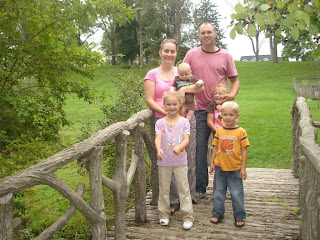 Our little family on one of the bridges. Don't those look like real logs? 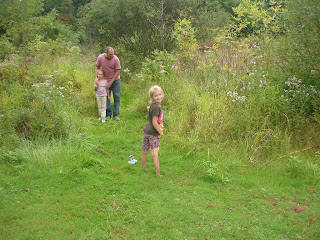 On one of the trails that Jonathon and the children went on (the stroller didn't go too well on some of them, so we took the trail more heavily traveled with the stroller), there was a little mud hole at the end of the trail. Alegra neglected to see it when she got to it and stepped right in it. Yep, mud spattered all over her leg. Oh no! But she was a decent sport about it. Notice Jonathon now directing Diella carefully around the hole. Ha! 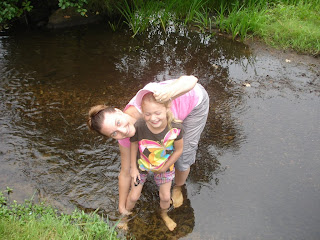 Especially once we convinced her to get into the creek to clean the mud off. This little creek was so delightful. It was chilly, but I can just imagine this being a hot spot for families on warm summer days. We loved it....once we found an area where there weren't any bugs and the water was nice and clean. Alegra wasn't real sure about it until I got in first to show her it was just fine. 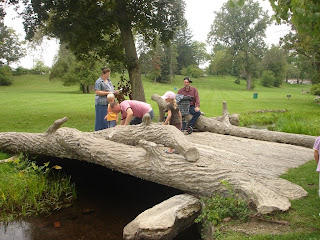 Another one of the bridges. My dad was fascinated with this park as he used to work for a cement company. It was a little more intrigueing to him than the rest of us. But we all enjoyed it a lot. 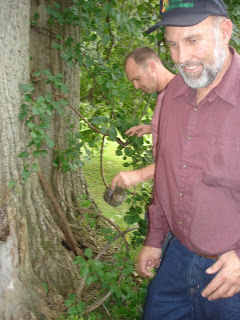 The guys found the only box, nestled nicely outside and very close to the poison ivy vine. Yahoo, we found one!!! They hand carved their stamp that was a fish and glued it onto a small piece of ruler. Very clever. My mom continued on reading the clue to find out where the next one was while we did all of our stamping and writing in our books. 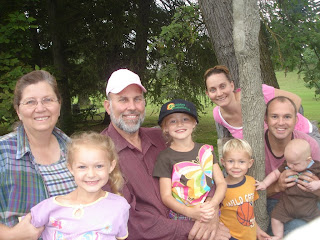 We sat on this bridge and listened to my mom read the next clue. All seven clues were in story format and interesting but kind of hard to follow, obviously since we only found one. This turned out to be a great picture with everyone included. 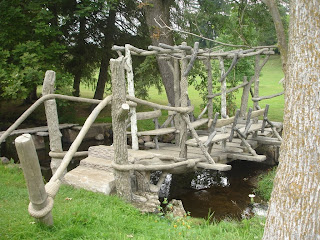 Here is a picture of that bridge from a distance. The guys tried to find the one near this bridge, but again poison ivy won and they decided to pass digging too deep into it. Aren't the details of this bridge amazing. He ropes (actually cement) even have knots in them. There was also a covered bridge at the park, but I didn't get a picture as there were other people sitting on it when we were by it. It was quite amazing though! 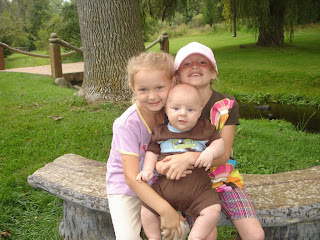 It began raining and everyone else was looking for a letterbox when I decided to get just one more picture. After clicking this one, we darted up the hill to get out of the rain and see if the others found the last one. Nope, it remained to be unfound. But we all did have a wonderful time enjoying this little unknown park. I highly recommen everyone checking it out if you are ever in the area of Somerset Center, MI. It is on the corner of US 12 and Jackson. Let me know if you go visit and what you think about it. Or if you go letterboxing and where you went. There's always an adventure out there with letterboxing.
We then headed to my brother's to visit with them and see how their twins were doing. They are growing and seem to be doing well. Still quite small but what a blessing doubly!