It's very rare that the Murphy family gets together to actually spend time together, having fun, visiting, eating, etc.  My mom planned a special weekend for all of us to just enjoy each other and have a good time.  She put a lot of time into making it special for everyone.

The weekend started out Friday evening with a meal of pizza, burrito casserole, salad and ice cream.  Yummo!  Mom made some luminaries to go outside for us to enjoy from the window inside and when we left to go home.  Since dad works late in the evening, we waited til he got home from work, which actually turned out to be earlier than most nights.  He had prepared to pray a blessing over each grandchild and started from oldest and went to the youngest.  It was fun watching the children wait their turn with great anticipation to receive their blessing from grandpa. 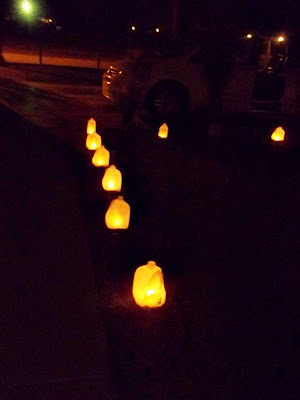 Saturday we woke up bright and early to head back over there for breakfast at 8:00am.  Breakfast was delicious as all the food was over the weekend, and we waited for the extra guests to arrive.  Some of our cousins, Doug, Bev and Benjamin also came to enjoy the fun that was planned.  The children knew that there would be fun things planned but only specifically knew that everybody was doing a part in a program.  For that we waited for Grandpa Murphy and his sister, Rosie.

While we waited, we put the children to making their party favor bags that would hold all their goodies that they made and received from the day.  The owl bags turned out so cute and were perfect for holding all the fun! 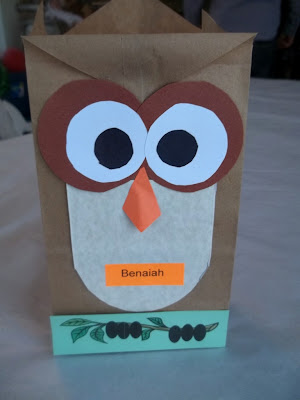 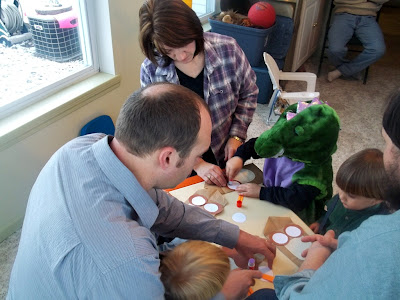 We had some busy little critters making owls. 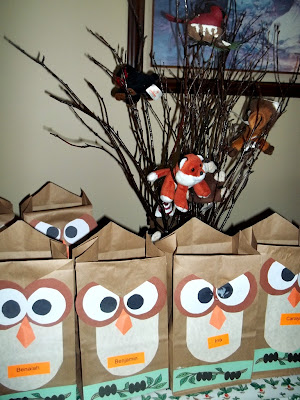 All of the owls lined up on the bureau with other animals and decorations.

It takes a bit to get ready for sit down times with nervous little people deciding they have to go potty before they start their part in a program.  : )  And two little identical potty trainers take a bit longer, so we had to fill some time before we could start the program.  Grandpa Dan did some juggling of bean bags and then with his side kick, lion Benaiah, they welcomed everybody to the program.  Benaiah is saying (gesturing to all of the crowd), "Welcome to the program" in the below picture. 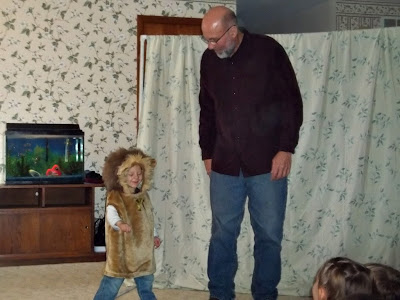 After the introduction, Grandma Deborah started off the program with reciting some Scripture.  Joshua's family followed with poems that their children had memorized.  The Bovees were the grand finale with a little play about animals that they did for their school program last year, a song, and then another song.  One evening Jonathon was playing his guitar at home and Benaiah kept yelling, "buck, buck".  I asked him if he wanted to sing a song about a buck, and he did.  He is very into bucks and guns since going to track the one grandpa Dan shot this last season.  So, we decided we would write a song about Grandpa Dan's hunting experience this last year.  It turned out to be a special song that we included numbers for points on the antlers and echoes, so that others could participate.  It was great, and Benaiah sang right along and did his parts throughout.  And it became a song we sang a couple more times that day just for the fun of it.  I do believe Grandpa Dan enjoyed it along with everybody else! 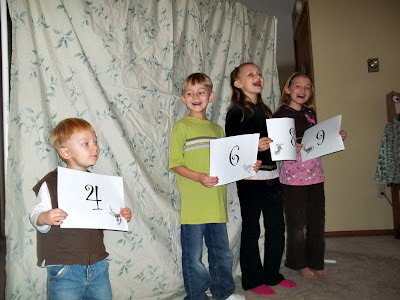 After our family program, we had some time to fill before the grand program.  I had brought along felt, handmade mittens that contained animals from the Mitten story.  All the smaller children got one and we read through the book with the children acting out the story with their own felt mitten and animals.  By that time it was nearer to the arrival of our special guest, so potty breaks all around just in time for the next program.

Mom had ordered a Groupon for Indiana Wildlife to come and do a program with animals.  So that was next on the schedule.  The guy was right on time and had some fun animals to share with us.  The children loved it.....adults too.  Following are some of the pictures during the program and the animals that he brought. 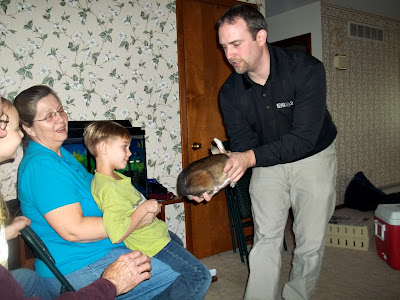 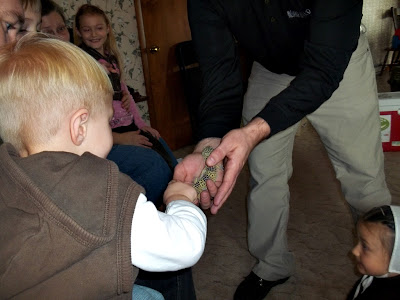 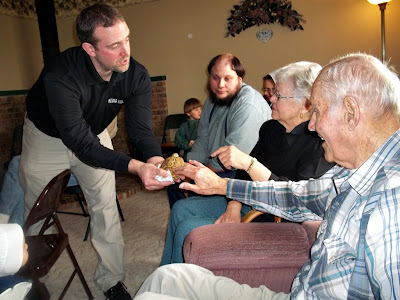 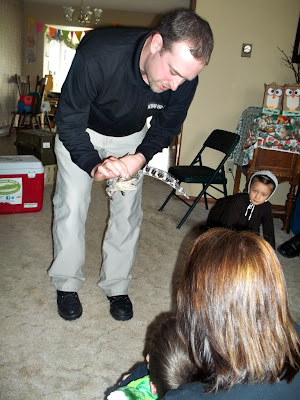 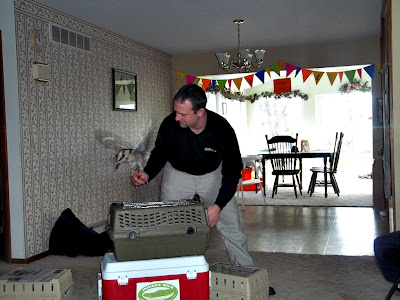 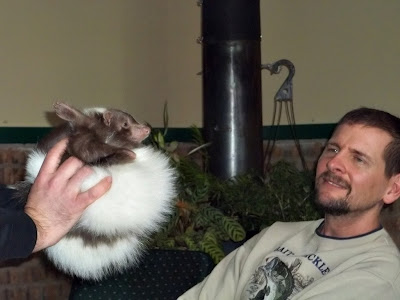 He brought a special rabbit that was amazingly soft, a lizard, alligator, rat, cock roach, tortoise, kukaboora, and a skunk.

By the time we were done seeing animals, it was time for lunch.  One thing the children like to do is go rabbit hunting with Grandpa Dan.  There are usually a bunny or two in their yard, grandpa will place everybody strategically around the garden, then he will go to the edge of the yard where the bunnies usually are and chase them out to the children.  There is no shooting that goes on, just a scurry of children running to try to catch one.  It's quite comical to watch.  Today there was only one rabbit, and it ran the wrong direction for the children to chase.  It did give them some outside fun though and gave us time to get food around and set up without children under foot. 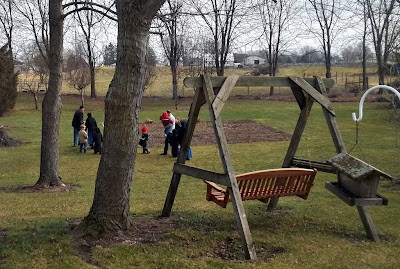 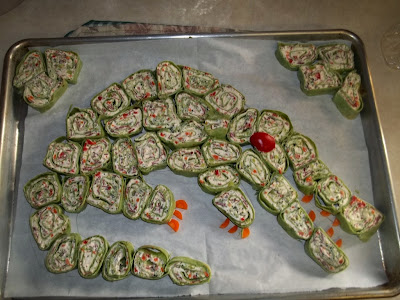 We had alligator roll ups. 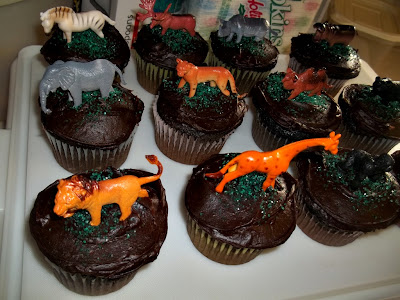 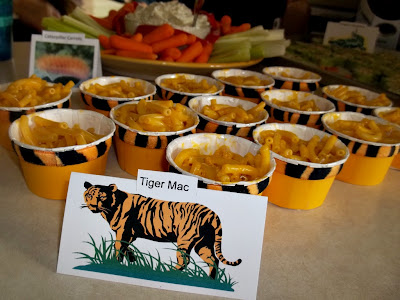 With so many little ones in the group, there was definitely a nap time after lunch.  So, while the younger ones slept, the older children got to do some fun crafts with markers, wood,  and paint.  ﻿ 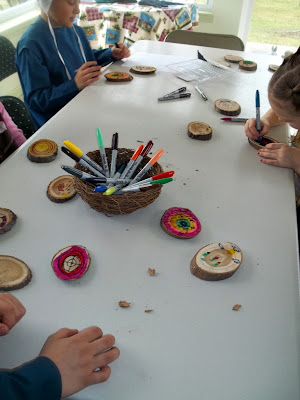 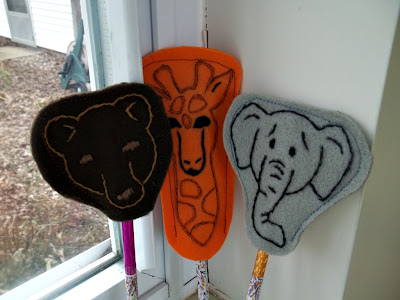 Aren't these adorable?  Mom made these to top pencils but they ended up being more like finger puppet size.  Another party favor to put in their owl bags. 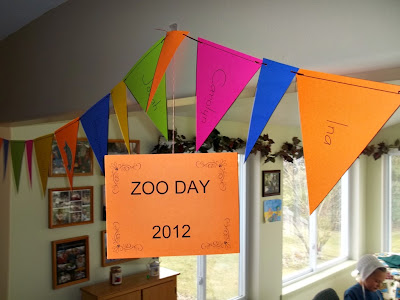 A fun banner with the names of all the children on it and animal pictures. 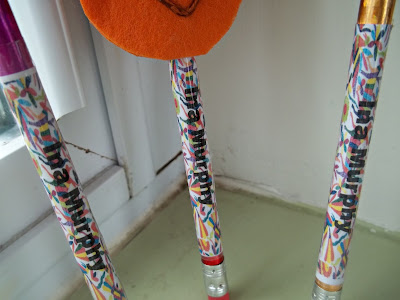 Everybody got 3 pencils for their bags with their names on them. 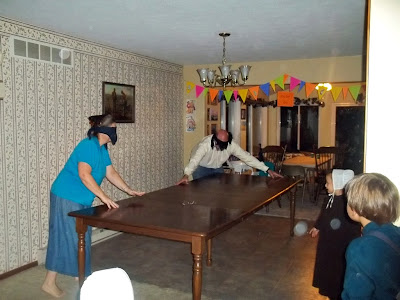 After crafts, naps and visiting time, we had left overs for dinner then played this deer hunting game.  One person is the hunter and one is the deer.  In the above picture, mom is the hunter, hunting dad.  Oh, I should have been videoing instead of taking still pictures because the stillness just doesn't do it justice!  By the end they were running around the table, mom was making noises when she'd get close to dad, which would scare him to death and make him jump and yell too.  Oh, we got some pretty hard laughs out of this one!  What fun! 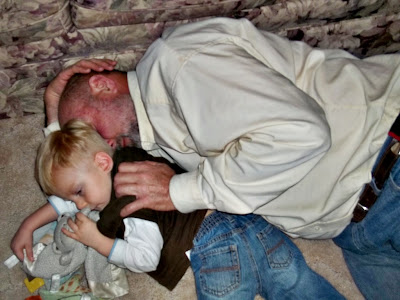 After the games, we all sat around and sang for a bit and sang the buck song for grandpa again and recorded it, so he can watch it over and over.  The evening was definitely coming to a close with sleepiness coming on us all.  Was a big day full of learning about animals, enjoying family and singing to end it all.