Science Experiment of the Caterpillar and Butterfly

With having our own little butterfly being born last week, I didn't get around to posting about our science experiment with the caterpillar.  A few weeks ago we found a caterpillar on my parsley eating away.  This is the first year I was able to get parsley to grow, so I wasn't about to let the little guy eat it all up.  I told the children what I found, and of course they were all quickly to see what I was talking about.

One day at the farm, a family stopped by to show the children what they had been collecting.  They had been searching for milk week to find caterpillars to raise and watch turn into Monarchs.  They had a couple different sized caterpillars that they found, and we were fascinated with their experiment.  So, when we found this little guy, we decided to try our hand and learning about the process of a caterpillar turning into a butterfly.  I must confess that I thought I knew how it all worked, but I learned a great deal also during the few weeks of us having this new, temporary pet.
﻿ 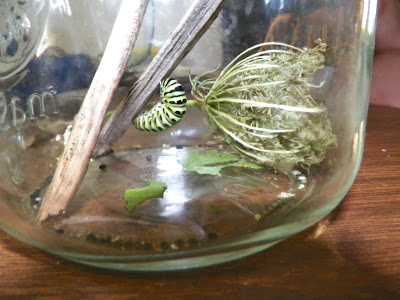 Here is our caterpillar, Parsley, named so appropriately for the plant we found him on.  Since I didn't want them giving him all my parsley to help him complete his process, I had them research what other plants parsley caterpillars like to eat.  Thankfully, they also like to eat queen anne's lace and with that in abundance around here, they picked his meals from along the road instead of from my herb garden. 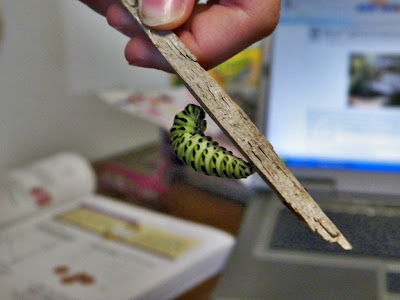 The children did some research on what kind of caterpillar this is.  Their guess was a black swallowtail butterfly, so we anxiously waited to see what it would become. 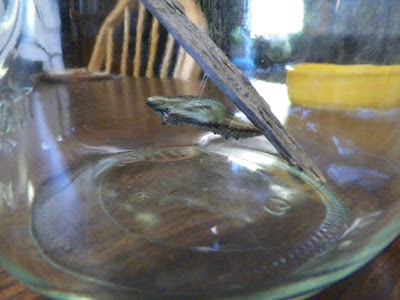 We kept a close eye on him to make sure we would get to see the process of him spinning his chrysallis.  I should have taken a picture before this stage.  The caterpillar actually was hanging just as the chrysallis is by two threads from the stick.  It was like the when we all went to bed.  By morning, the process of forming the chrysallis was over, and we were all disappointed that we missed it. 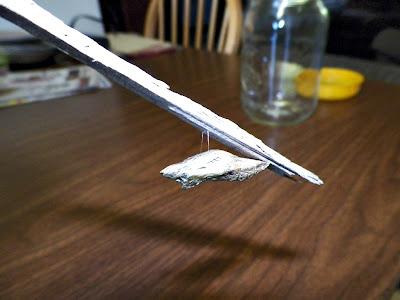 We read that the black swallowtail can make its chrysallis look like whatever it chooses to hang from.  In this case a dead stick was what it hung from and it looked just like it in color. 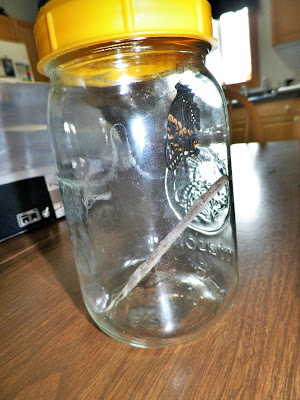 With all of our excitement in having a new baby, we kind of put our jar on the shelf and didn't keep track as much as we should have.  Well, the morning after Saphira was born, our butterfly also was born.  But again, we missed that as well.  I've read that it can be a very quick process anyways.  One thing with this kind of butterfly though is that the chrysallis doesn't change during the butterfly's escape.  It stayed the same brown color and just a little slit on the top of the chrysallis was made to allow the butterfly to come out.  We were watching for signs of change and that didn't happen so we didn't know how close it was to coming out. 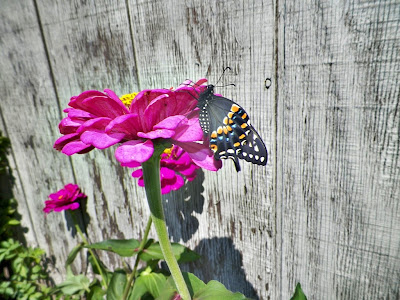 Oh the excitement to see it in the jar.  The children immediately took it out the back door and put it on a zinnia as we also read that they like to eat from those flowers.  They watched it for awhile dry out and get used to the world around it.  After awhile it was gone. 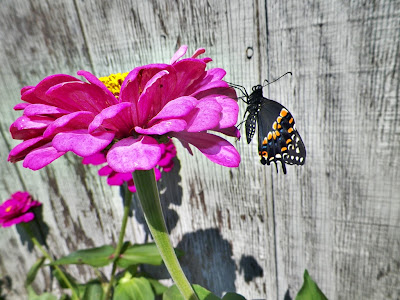 We have since learned that our neighbor has had a black swallowtail flying around and enjoying her flowers.  We wonder if it's parsley.  It would be interesting to go see the butterfly down there and compare it's markings to that of parsleys from our pictures.  It could be a neat experiment on identification.
This momma has enough going on though and is staying to home for awhile.  It's time to get in a routine with the new baby and school and get started packing up to move.  Never a dull moment, but we do stop to smell the flowers and enjoy nature.  Don't want this life to be too fast paced that we miss those special touches that only the Creator can send our way.