Well, half the day passed before I realized that I hadn't taken any pictures. We did more flashcards of which Alegra slaughtered Zeky (he wasn't very happy about that) and all the children were jumping crazy with the shape/jump cards. They did 25 minutes of reading while the littler ones played computer and you can imagine as soon as the timer went off they were in at the computer in a heart beat. :) Then we voyaged out in the snow for one of Zeky's other special requests....The Bent and Dent to get.....(see below). 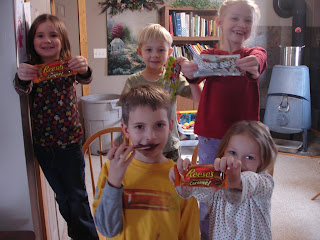 ....candy bars! And why was I thinking we would run in, get what we wanted and run back out again? Right! There were 4 BIG bins of candy bars. One would have been bad enough, but 4?! Then onto some painting. They were all really patient with me as I wanted to get supper cooking first, so they sat with paints out and most everything ready except for minor details waiting for me to get food stuff cooking. They had a lot of fun with this project! I had extra paint brushes and paint colors which made it even more fun since I couldn't get those little paint thingys open that came with the kit. 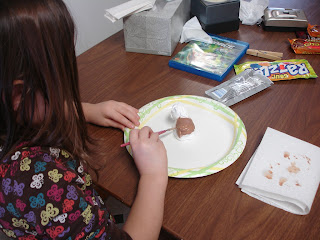 Here is Elli doing her horse. And a mighty fine horse at that! 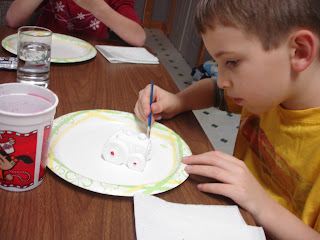 And Zeky in great concentration making sure that every part of his tractor was just the right color. He planned it all out I think before he started. 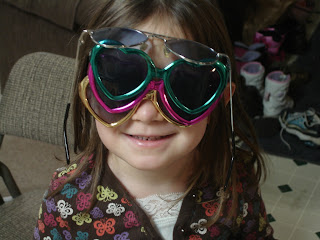 The Diva! While the ceramics dried the children had fun with the sunglasses. Elli came out of the bedroom like this and we all cracked up. What a sweetie! 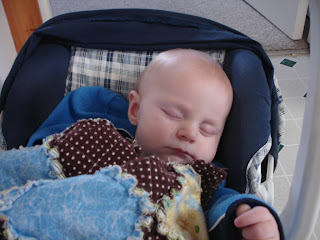 And while the big children painted and played, this little guy was too tuckered out from the Bent and Dent trip and slept through it all. :) 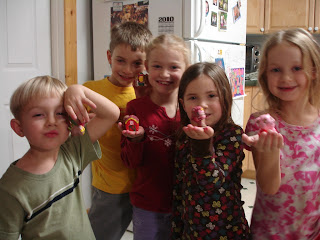 The final projects along with proud painters! 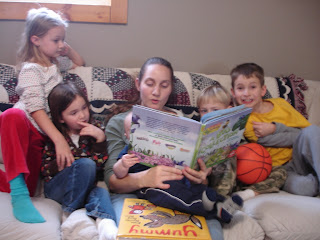 We found the book with the insects starring Hermie the caterpillar at our library before the children came to stay with us. The first night before bed we read one of the stories and are trying to get through the book since we generally read Scriptures before bed. So, I took my turn reading one of the stories for some quiet time. Everybody loved it! Zeky really looks like he was loving it! Ha! 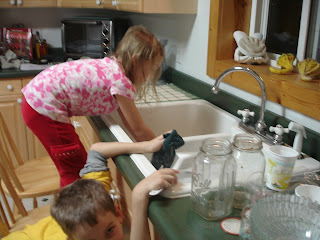 After our soup and cornbread, we had some anxius children for dessert, so I told them they had to help clean things up from supper. I gave Zeky the job of washing dishes which he was not fond of and certainly didn't want his picture taken doing this job. Can you tell? Hehe! 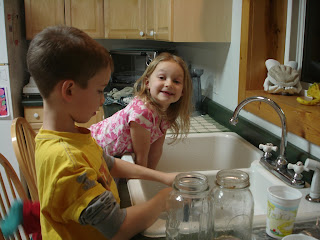 He realized I was going to get his picture whether he wanted it or not an gave up the fight. He was much happier when I demoted him to drying. 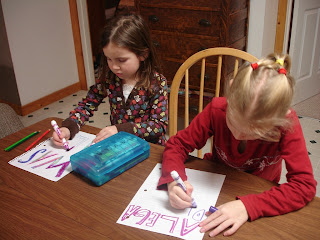 After clean up the girls got busy making pictures for the vacationing parents/friends. 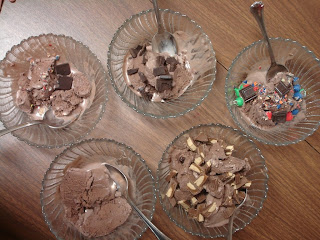 And then on to dessert! We crushed up our candy bars from the store and put on our chocolate ice cream. Mmmmm, was it every good! Looks good, doesn't it? 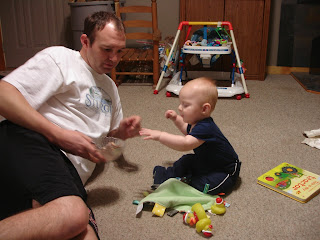 Jonathon sat in the living room with Benaiah during the ice cream happenings and Benaiah was thinking that he should be having some. I finally got some rice cereal. I think I better start with him before we just skip the cereal and go to fish. 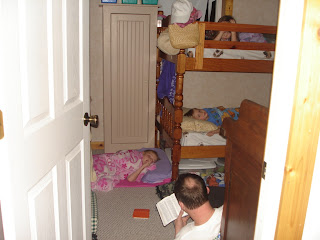 And finally bedtime (and a bald spot- wow)! That's my favorite part! Just kidding...kind of.
Two days down and one to go. We have some fun stuff planned for tomorrow. Since you are coming home tomorrow, you probably won't see our post for you until you are already home, but it should have some good pictures of our day that the children are looking forward to. Some they know about and some they do not. We'll see how it all goes. In the morning we head to the Park's for story time. Zeky is really excited about that! I made them all wear the clothes that they are going to wear tomorrow to bed, so I donn't have the stress of doing all that in the morning. Zeky wasn't too sure about that idea, but since he is so excited to go, he didn't want to be late and thought that if it would help then he would do it. He's so funny! I assured him it was fine just this once.
I am realizing that everything with this many children takes a lot longer. Some how I forget about Benaiah, and he doesn't usually get changed into normal life until lunch time. We've done some school stuff but nothing formal. It would be a challenge for sure to do actual school with all of them, but I suppose over time a routine would get set and it would all be fine. But for three days there has been no routine. Just hopes of getting certain things accomplished. I did get a shower today, so I was super excited about that. And I must say that Elli is worse than Diella when it comes to being hungry ALL the time. But she sure is cute about it.
Okay, JB is snoring while Benaiah is kicking his feet and flapping his arms in Jonathon's arms on the bed, and I should get him changed and ready for bed. Been enjoying the pictures you guys have posted. Hope there's more! We'll see you soon!
(posted for the Brothers, who are vacationing while we have their children for a few days, but is for all to enjoy as I cope with a small house filled with 6 children and 2 aults)