Today's Cooking Skills we turned into two days.  It seems that my girls needed some experience in using the rolling pin.  By day 2, they did a great job at getting the correct thickness and rolling out dough.  Here is what we did for our next lesson.  ﻿ 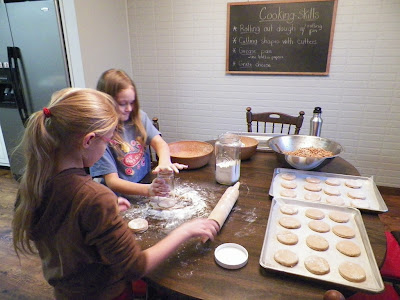 The girls made some of the best, soft, sugar cookies I've had (other than Loft House- we'll have to work on duplicating that one).  We have an abundance of plain yogurt from getting it on sale at different stores, so I've been looking for recipes that I can use it in place of sour cream.  These sugar cookies were perfect for it, and we also substituted half of the all purpose flour for whole wheat.  They turned out great!  If you want to give these a try, here is the recipe.  Sour Cream Sugar Cookies.

Day 2 we did some more rolling out of pie crust.  With a Celebration coming up, my good friend Casie and I have been experimenting in the kitchen to have not a very good success with what we've been trying.  So, I thought I'd try these mini apple pies tonight and see who they turned out.  They were fabulous! 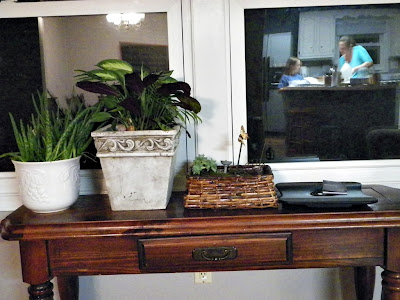 I was going over the pie crust recipe with Diella while Alegra took some pictures.  Isn't this picture neat!  She is so creative in her picture taking.

Diella loves to be in the kitchen and has mastered some pretty delicious things.  Alegra mentioned the other day that she would like to be famous for some recipes but just doesn't know what.  Diella makes killer no bake cookies and some super amazing garlic bread.  So, I told Alegra that she could master apple pie and her response was, "only if it tastes good".  : )  Well, these fit the bill.﻿ 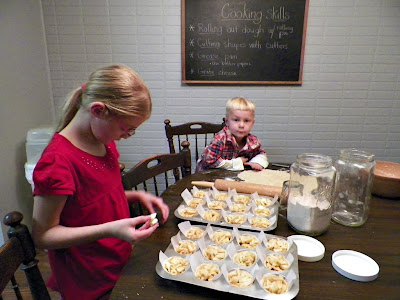 We cut strips of parchment paper to put in each muffin cup to make the removal of the pies easier.  Then we pressed in the circles she cut out of pie crust, filled with apple mixture, dobbed with butter, and sealed another crust on top.  Ready for the oven! 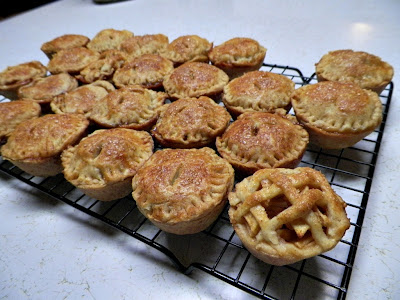 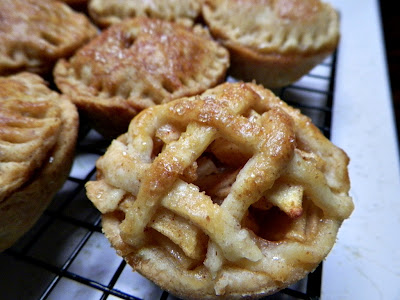 Aren't these the most adorable pies you ever did see?  We only did two of them with the lattice top crust-too much work!  : )  I also want to add that I did not use the recipes crust recipe.  I used my grandma German's recipe for the crust.  Also, we guessed at how many pounds of apples we had and just went with it.  I used 4 BIG apples, my grandma's crust recipe and we made 24 mini pies.  I might add though that a few of them didn't get full tops of crust, but just a small circle as we were getting low on dough.  But they still turned out great!  Oh, and the recipe doesn't specify how long to have them in the oven.  We had them in for about 25 minutes.  If you want to try these, here's the recipe.  Mini Apple Pies﻿.

These girls are learning some great skills.  And I'm looking forward to when I can step out of the kitchen and let them run the meals.  That's the girl.  They can cook up a storm while I sip my iced tea and lounge in the sun.  Okay, that probably won't happen, but it will free up my time for other things and not be so busy with all the household duties.

Also, if you just follow our family in general and not just the homemaking class, you'll be interested to know that Oreo our steer, is getting to be a little stinker since we've moved to the farm.  He's become quite the escape artist.  Jonathon's brother Jeff helped me out last night get him back in and worked at the fence since Joanthon was still at work.  Thank you Jeff for lending a hand.  Oreo's been scanning the area, trying to find his escape route and trying his best, but with no success.  It just might be fixed!  But despite all that, Oreo is still needing butchered and if he figures out another weak spot in the fence, well, he will be butchered sooner than later.  This is perfect timing with the girls learning cooking skills.  Meat is a part of meals and it's great that they'll be learning first hand about the quality of meat, how we get hamburger and then we'll have to of course use it in some delicious recipes.  I'm sure we'll post on butchering day as it will be bitter sweet.